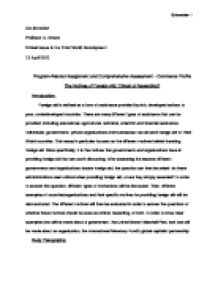 The Motives of Foreign Aid: Ethical or Rewarding?

Jon Schneider Professor A. Dewan Ethical Issues in the Third World Development 13 April 2012 Program-Related Assignment and Comprehensive Assessment - Commerce Profile The Motives of Foreign Aid: Ethical or Rewarding? Introduction: Foreign aid is defined as a form of assistance provided by rich, developed nations to poor, underdeveloped countries. There are many different types of assistance that can be provided, including educational, agricultural, technical, scientific and financial assistance. Individuals, governments, private organizations and businesses can all send foreign aid to Third World countries. This essay in particular focuses on the different motives behind donating foreign aid. More specifically, it is the motives that governments and organizations have in providing foreign aid that are worth discussing. After assessing the reasons different governments and organizations donate foreign aid, the question can then be asked: do these administrations seem ethical when providing foreign aid, or are they simply rewarded? In order to answer this question, different types of motivations will be discussed. Then, different examples of countries/organizations and their specific motives for providing foreign aid will be demonstrated. The different motives will then be evaluated in order to answer the questions of whether these motives should be seen as ethical, rewarding, or both. ...read more.

From an American standpoint, the United States let it be known that they wanted to eliminate trade barriers, rebuild war-devastated regions, improve industries and have Europe flourishing again. The motivation behind this program was highly criticized when it slowly became publicized in the early 1950's that this program was pursued by the United States with the intent of preventing Soviet communism from spreading around Europe. A total of US $13 billion was given in technical and economic assistance to countries that were members of the Organization for European Economic Co-Operation. With so much money being given to the Europeans, one must ask if the United States was looking to have European countries flourish again from an ethical standpoint (part of the culture), or was the United States looking to reward themselves by preventing communism from spreading around Western Europe? Many critics argued that the Americans did not need to invest so much money into this program, and that donating US $13 billion made the United States look like it had further intentions with its plan. Critics did not feel that "it was necessary for Americans to be using so much money to help nations [the Americans] had already assisted in many ways before" (Shain 2). ...read more.

What this essay aimed at answering was the question: do governments and organizations seem ethical when providing foreign aid, or are they simply rewarded? In order to answer this question, different types of motivations were deliberated. These include the concern for the welfare of others, supporting an ally country in order to receive help with the donor's goals, the interpretation of universal rights, and for compensation. Each of these motives, among others, can be interpreted and assessed. The concern for the welfare of others is clearly more ethical, while supporting an ally country in order to receive help with goals is clearly more rewarding. In order to further analyze this, an example of bilateral aid, the United States' Marshall Plan and an example of multilateral aid, the International Monetary Fund, were used. The two different examples showed that the motivation behind foreign aid is multi-layered. If a donor country was only looking out for a recipient's interests, they may fail to continue to prosper as they may lose sight of the direction the donor country should be headed in. On the same note, if a donor country was consistently looking out for personal interest, the social status of that country can quickly diminish compared to others. In conclusion, this essay demonstrates that motives cannot only be ethical or rewarding, instead, motives tend to be both ethical and rewarding. ...read more.