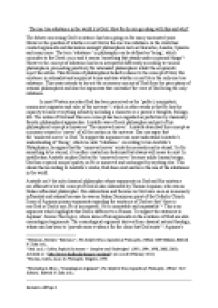 The one true substance in the world it is God. How far do you go along with this and why?

﻿The one true substance in the world it is God. How far do you go along with this and why? The debate concerning God?s existence has been going on for many uncounted years. However the question of whether or not God is the one true substance in the world has created arguments and discussion amongst philosophers such as Descartes, Anselm, Spinoza and many more. The term ?substance? in philosophy can be defined as ?being?, which coincides to the Greek ousia and it means ?something that stands under or ground things?[1]. However the concept of substance has been interpreted differently according to various philosophers, proceeding positively for rationalist philosophers whilst the empiricists reject the notion. This division of philosophical beliefs coheres to the concept of God, His existence in rationalist and empiricist terms and also whether or not He is the only one true substance. This essay intends to lay out the necessary concept of God from the perceptions of rational philosophers and also the arguments that contradict the view of God being the only substance. In most Western societies God has been perceived as the ?perfect, omnipotent, omniscient originator and ruler of the universe?[2], which in other words is that He has the capacity to know everything infinitely including a character or a person?s thoughts, feelings, life. ...read more.

Anselm?s argument attempts to prove the existence of God through pure logic meaning. However Anselm does not imply that God is a substance opposing to the Aristotelian category of substance, as Davies and Leftow have written that Anselm argued that ?words that imply relations between God and other things do not apply to or express God?s ?substance??[7]. So Anselm doesn?t refer God as a substance but he rather exemplifies Him to words from the categories of quality such as just, living and true. Not only that, he uses the word ?omnipotent?, to quantify God?s power. Therefore it could be said that Anselm doesn?t accept God as a substance but he says that the idea of God ?exists at least in our understanding?. Rene Descartes is one of the philosophers who took Anselm?s ontological argument and provided his own version of the ontological argument in the Fifth Meditation. The original version of this argument follows as: 1. God is the most perfect (?the greatest?) being conceivable. 2. It is more perfect (?greater?) to exist than not to exist. 3. Therefore, God must exist. Descartes demonstrates the existence of God from the idea of an absolutely perfect being as Oppy highlights that Descartes argues that ?there is no less contradiction in conceiving a supremely perfect being who lacks existence than there in conceiving a triangle whose interior angles do not sum to 180 degrees?[8]. ...read more.

He also rejects Descartes distinctions between thinking substance and extended substance. As Spinoza believes there is only one type of substance: substance. So for Spinoza, God is the only one true substance in the world. The question of whether God is the one true substance in the world is highly a difficult one with the acceptance as well as the rejection. However the importance should not only be pinned against the questioning of God being the one true substance but matter in fact, the whole concept of God and his existence should be examined too. That is because the word ?substance? correlates with ?existence?, as in some theories in order for God to be a substance He has to exist. To justify that statement, Spinoza argues that God necessarily exists, because God?s (substance) essence is existence. However the validity of his arguments that God is the only substance is questionable, as there are many philosophical problems which his metaphysics cannot answer, such as the problem of evil. To answer that, it could be highlighted in Spinoza?s argument that ?God?s essence is perfect?, surely ?evil? can be part of that essence? To conclude the question on the concept of God and His existence has already been proven by theories and logics however only one can determine whether or not God is the only one true substance in the world. ...read more.