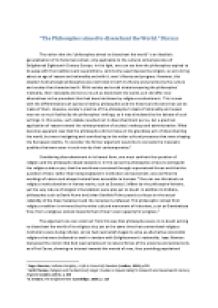 The Philosophes aimed to disenchant the World. Discuss

﻿?The Philosophes aimed to disenchant the World.? Discuss The notion that the ?philosophes aimed to disenchant the world? is an idealistic generalisation of its historical context, only applicable to the cultural contemporaries of Enlightened Eighteenth Century Europe. In this light, one can see how the philosophes aspired to do away with the traditions and superstitions, commonly superimposed by religion, so as to bring about an age of reason and rationality and with it, man?s liberty and progress. However, this idealism held amongst philosophes was restricted in both its theory and practice by the culture and society that characterised it. With society and social strata tempering the philosophes? mentality, their rationality did not so much as disenchant the world, as it did offer new alternatives to the precedent that had been laid down by religious enchantment. This is seen with the differentiations of opinions held by philosophes and the historical criticisms that can be made of them. Likewise, society?s practice of the philosophes? ideals of rationality and reason was not so much fuelled by the philosophes? writings, as it was stimulated by the debate of such writings. In this sense, such debate resulted not in disenchantment per se, but a practical application of reason toward the reinterpretation of society?s makeup and administration. What becomes apparent was that the philosophes did not take on the grandiose aim of disenchanting the world, but were instigating and contributing to the wider cultural processes that were shaping the European identity. ...read more.

What this indicates of philosophe ideals is a far more engrained bias than the philosophes would concede and a bias which was held by individuals considered almost messianic to the public sphere. Not only did they construe questionable arguments from their reason and rationality, but they realised the utility of factors otherwise opposed to the enlightenment ideals. What truly puts this bias in the context of one?s wider critique of the philosophes? ideals was Mary Wollstonecraft?s A Vindication of the Rights of Women. In it Wollstonecraft criticises patriarchal precedents and that ?the power of generalising ideas? from individual observations, is the only acquirement, for an immortal being? and that ?this exercise is the true cultivation of understanding.? Not only does she encapsulate the misplaced messianic qualities which were seen in individuals, such as Rousseau, but she highlights a fatal flaw in the philosophe mentality; that their objective and questionable observations had to be subject to understanding and which were consistently not. Thus it was in women?s nature to be subservient to men, just as it was in the nature of African folk to be slaves.[12] Just like the dogma of religion was subject to the authority of the Church, so too was this natural law subject to the literary elite and it was utilised to the effect of undercutting any movement that could be rationalised as irrational or offered different alternatives. ...read more.

aim of the philosophes was realised through European society?s reinterpretation of itself, as it was no longer guided by the rigidity of religious enchantment, but was interlocked with enchantment of the Enlightenment. In conclusion, it is evident that the philosophes aimed to supplant the ideals of religious sanctity and tradition with that of Enlightenment rationality and reason. This rationality and reason, however, was subject to the respective backgrounds, social strata and mentalities of the philosophes. As such, the enchantment of the Enlightenment was somewhat more intangible than that of religious enchantment preceding it, whilst designating the boundaries to which subsidiary cultural and social idioms were to bend to. This is seen with the difference of opinions between philosophes and the dismissal of certain motions which did not meld with the composure of philosophe ideals. However, in supplanting religious doctrine with that of the Enlightenment school of thought, one can see that although it was more intangible an enchantment, it was far more malleable for those who were enchanted, because, unlike religion, the Enlightenment was subject to rationality and reason and was, thus, compliant to differing attitudes. This is all the more evident with the numerous political reforms enacted by European governments and also with how the European monarch?s conducted themselves. Therefore, the philosophes did not aim to disenchant the world, but to instigate and contribute to the changing makeup and identity of 18th Century Europe. ...read more.