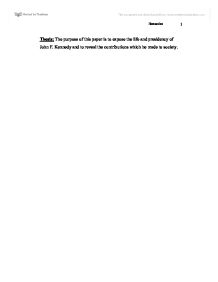 The purpose of this paper is to expose the life and presidency of John F. Kennedy and to reveal the contributions which he made to society.

Thesis: The purpose of this paper is to expose the life and presidency of John F. Kennedy and to reveal the contributions which he made to society. Obviously, John F. Kennedy was a very powerful, influential, and infamous man who indeed impacted our world in many ways. Furthermore, we will discuss how Kennedy became such a revered figure by the American public and what circumstances in his life prepared him for the role of President of the United States. There are many interesting facts which will be revealed including a timeline of major events which transpired throughout the course of Kennedy's presidency. This timeline reveals some of Kennedy's political and societal contributions which may be less known to the general public. In fact, during his time in office Kennedy actually was responsible for signing into law many diverse and important rulings which to this day continue to affect our society and our own personal lives to an enormous extent. There is no denying that Kennedy was a charismatic figure and both his personal life and his presidency reflected this charisma. While Kennedy continues to be revered and admired for his many contributions his life and death are also surrounded by a great deal of mystery and intrigue as well. ...read more.

John F. Kennedy and His Political Career Once Kennedy returned from the war, his political aspirations began to surface. Backed by Joseph Sr.'s immense financial and political clout, JFK was elected to the House of Representatives from Massachusetts in November 1946. He served in the House for six years, during which time the Cold War between the United States and the Soviet Union came to dominate world politics. At home, paranoia about Communism enabled a maverick Senator from Wisconsin named Joseph McCarthy to conduct witch hunts for Communists and Communist sympathizers, a practice that became known as "McCarthyism." JFK was frequently ill during these years. He was diagnosed with Addison's disease, a potentially fatal condition, in 1948, but cortisone treatments enabled him to fight the disease, and his condition was never revealed to the general public. In 1952, JFK ran successfully for the U.S. Senate from Massachusetts, in a year that saw Dwight Eisenhower elected president. During this time, he also met and married Jacqueline Bouvier, who became important not only in his personal life but in his political life as well. In fact, many claim that much of his success as president was due, at least in part, to Jacqueline's immense popularity. ...read more.