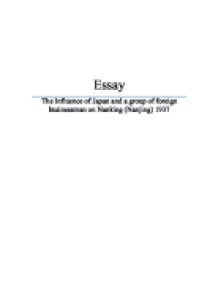 The r**e of Nanking and its effects on Sino-Japanese relations.

Essay The Influence of Japan and a group of foreign businessman on Nanking (Nanjing) 1937 INTRODUCTION In the past few centuries, there were many effective foreign countries which have left their marks in the long Chinese history. In Nanking (Nanjing) one can find many foreign influences. This Essay will describe what happened in Nanking (Nanjing) in 1937 and how Japan and a group of Western foreigners influenced this Area, the thoughts of the people in China and the Sino-Japanese relationship. MAINPART During the Second Sino-Japanese War (July 7th, 1937 - September 9th, 1945), the imperial Japanese troops marched Nanking (now Nanjing) on December 13th, 1937. This was the beginning of the nowadays known "Nanking Massacre", one can also find it under the names "Nanking Atrocity" and "r**e of Nanking"1. When the Japanese troops entered the city, they left a path of destruction: they killed Chinese soldiers and civilians without reason, raped Chinese women, plundered and destroyed Chinese properties on a very large scale. The violence used against the Chinese and the degree of destruction was enormous, despite the efforts of some Japanese people to minimize this. The Japanese occupation effected resulted in a big rising number of marriages and engagements compared to the previous years. That happened, because many parents with grown or engaged daughters wanted them to be married, before something bad happened to them. By November, the majority of people, Chinese as well as foreigners, had already left the city. ...read more.

They often killed the women after the r**e, others were kept as "comfort women". The women who learnt that they will be the latter often took their own lives in order to prevent themselves to undergo that torture; others died from disease or murder. Often the women were raped in front of other people or Japanese soldiers as well as by more than one person. This open display of sexuality was a damaging act for the people, who lived in a country with a strong emphasis on traditional morality with regard to s****l behaviour. That means, for those who survived, suffered a lifetime of shame and isolation, sterility or ruined health.4 It is impossible to find out the exact number of women being raped. One can find the number of twenty thousand as well as the number of eighty thousand. Another result of the r**e of women are the pregnancies. Many of the children were secretly killed when they were born or the women killed themselves before even giving birth. One can only guess what the women went through when they had to make a choice, either giving birth to a child they could never love or committing infanticide. Many women could not make that kind of decision and committed suicide. After the six weeks or this horror, Nanking was left in ruins and the Chinese people, who survived, were left with irreparable physical and mental wounds. ...read more.

China"8 due to his efforts to stop the atrocities of the Japanese army and, failing in those efforts, his work to protect Chinese civilians during the event. As a result, he is credited with saving the lives of 250,000 Chinese people from the Japanese troops. Rabe did not only help to establish the Safety Zone, but also sheltered 650 refugees in his own properties. The by citizens former called "foreign devils", where now knows as saviours and wherever they went, they were surrounded by many Chinese people. The Sino-Japanese relationship was largely affected by this event. If the Japanese would not have left such devastating path of destruction and fear, the relationship between China and Japan would not have been that problematic. These two countries could have had the relationship they have today already years ago. Also the mistrust of the Chinese people against the Japanese would not be present and the memories of the people who survived this massacre would not be filled with the traumatic memories which they passed on to their children and grandchildren. CONCLUSION Although the Nanking massacre is not well known to the rest of the world, it had a great impact on the Chinese people and the relationship between the two countries. The way the Japanese treated innocent Chinese people stuck until today in the heads of the Chinese, especially the ones affected by the event. Beside the negative influence of the Japanese, it was also the source of the Chinese unity. ...read more.