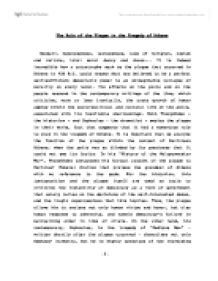 The Role of the Plague in the Tragedy of Athens.

The Role of the Plague in the Tragedy of Athens Despair, hopelessness, lawlessness, loss of religion, custom and culture, total moral decay and chaos... It is indeed incredible how a catastrophe such as the plague that occurred in Athens in 430 B.C. could resume what was believed to be a perfect self-sufficient democratic power to an unimaginable collapse of morality on every level. Its effects on the polis and on the people resound in the contemporary writings of the time, which criticize, more or less ironically, the acute growth of human agency within the socio-political and cultural life of the polis, associated with its inevitable shortcomings. Both Thucydides - the historian - and Sophocles - the dramatist - employ the plague in their works, fact that suggests that it had a momentous role to play in the tragedy of Athens. It is important that we analyze the function of the plague within the context of Periclean Athens, when the polis was so blinded by its greatness that it could not see its faults. In his "History of the Peloponnesian War", Thucydides juxtaposes his factual account of the plague to Pericles' Funeral Oration that praises the grandeur of Athens with no reference to the gods. For the historian, this juxtaposition and the plague itself are used as tools to criticize the instability of democracy as a form of government that solely relies on the decisions of the self-interested demos, and the tragic repercussions that this implies. ...read more.

In "Oedipus Rex" the plague is mentioned from the beginning and serves as a motivating force of the play that determines its entire action. It is brought to Thebes by Oedipus, who carries a curse with him. The plague of Thebes consists of "a pollution grown ingrained within the land" (99), a moral pollution associated with Oedipus himself. Its source lies in Oedipus' doomed fate, which is a supreme force that cannot be avoided by any means. The plague is fated, given by the gods and can only be eradicated with their help: Apollo "in plain words commanded us to drive out the pollution from our land...drive it out, said the God, not cherish it, till it's past cure"(97-101). The god further predicts that "purification" can only be achieved "by banishing a man, or expiation of blood by blood, since it is murder which holds our city in this destroying storm" (100-102). Therefore, the plague, seen within the very context of the play, is a form of retribution brought by the gods, which flows over the entire polis due to Oedipus' harmatia. As a dramatist, Sophocles employs the force of prediction as a solution to the problem. Furthermore, the transition from Jocasta's initial disbelief in fate and oracles to her gradual discovery of the truth and Oedipus' disbelief in Teiresias' words (who was spreading the word of the gods), hints at the fact that there is a limit to human knowledge and understanding of the universe. ...read more.

They are both affected by blindness, they cannot distinguish between appearance and essence. The tragedy of Oedipus' family evokes the tragedy of the internal struggles among the Greeks and, at the same time, the tragedy of Oedipus evokes the Athenian tragedy. In sum, what is the role of the plague in the tragedy of Athens and how is his role employed by history and drama? Thucydides' goal is to give a rational explanation to the causes of the war and to the loss of the Athenian empire. Consequently, he stresses the plague for he believed that it led to the fall of democracy, and ultimately to the fall of the empire that was built on it. Sophocles' goal is to dramatize the socio-political chaos of Periclean Athens and to reinforce the idea that man is not the measure of all things and that catastrophes must be understood, through faith, as parts of the universe that man cannot entirely know. As a historian, Thucydides emphasizes the effects the plague had upon democracy due to the fact that people were given too much freedom under no constraints, whereas Sophocles, as a dramatist stresses the effects of the plague upon religion. While Oedipus tries to surpass the limits of human knowledge, the Athenians surpass their political, social, cultural and religious constraints. Their tragic fall suggests that there is a limit to human ability and reason, and at the same time, that people should keep their faith in the face of great misery. ...read more.