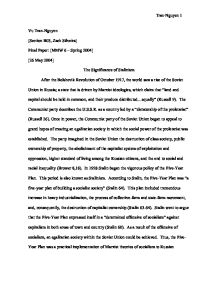 The Significance of Stalinism

Vu Tran-Nguyen [Section B03, Zach Silveira] Final Paper: [MMW 6 - Spring 2004] [26 May 2004] The Significance of Stalinism After the Bolshevik Revolution of October 1917, the world saw a rise of the Soviet Union in Russia; a state that is driven by Marxist ideologies, which claim that "land and capital should be held in common, and their produce distributed...equally" (Russell 9). The Communist party describes the U.S.S.R. as a country led by a "dictatorship of the proletariat" (Russell 26). Once in power, the Communist party of the Soviet Union began to appeal to grand hopes of creating an egalitarian society in which the social power of the proletariat was established. The party imagined in the Soviet Union the destruction of class society, public ownership of property, the abolishment of the capitalist system of exploitation and oppression, higher standard of living among the Russian citizens, and the end to social and racial inequality (Brower 8,18). In 1928 Stalin began the vigorous policy of the Five-Year Plan. This period is also known as Stalinism. According to Stalin, the Five-Year Plan was "a five-year plan of building a socialist society" (Stalin 64). This plan included tremendous increase in heavy industrialization, the process of collective-farm and state-farm movement, and, consequently, the destruction of capitalist ownership (Stalin 63-64). Stalin went to argue that the Five-Year Plan expressed itself in a "determined offensive of socialism" against capitalism in both areas of town and country (Stalin 60). ...read more.

In 1936 Stalin boasted that the Five-Year Plan had deteriorated the class struggles between the rich and the poor that had been inherent throughout history. In other words, there was no longer an "exploiting class" in the U.S.S.R. (Djilas 37). However, scholar Milovan Djilas reveals that the Soviet Union had manifested a "new class." This new class represents the communist political bureaucracy under the leadership of Stalin. Therefore, the illusion of a classless society under Stalin's appeal was distorted. While Stalin claimed the end to class struggles, he surreptitiously created a new class, a bureaucracy that "enjoyed a monopoly on property and power" (Brower 4). This can be seen in 1940 when Leon Trotsky, a Marxist revolutionary who was fighting Stalin's growing influence, was eradicated in order for the power of the Communist party to be firmly established (Brower 4). With this evidence Djilas established the conclusion that the Communist party was above all concerned with their own privileges and the defense of their power, not the interests of the masses. Further control and influence by the Communist party is evident in the large membership of the party. Djilas reports that the Soviet Communist Party had 887,233 members in 1927. By 1934 the membership had risen to 1,874,488 (Djilas 49). Djilas argues that this increase in membership improved the members' privileges, and increased the party's influence and control. ...read more.

Furthermore, the transformation of the Soviet Union to a totalitarian state bestows the bureaucracy the power to exploit the working class, a feature that Marx had condemned. This exploitation of the working class by the Communist bureaucrats is evident during the implementation of the Five-Year Plan when violence was committed to millions of workers in the effort to rapidly industrialize. The result was the decline in the living standards of the working class, as reported by Bergson's and Chapman's statistical analysis of the national income of the Soviet Union during the period of the Five-Year Plan. Therefore, the Communist bureaucracy under Stalin was ultimately pursuing the defense of its own power, rather than the interests of the masses. Finally, we cannot neglect the significance of this topic. The topic adds to the current thinking that ideals are sometimes impractical. Although Marxist ideologies were very appealing, human nature and greed limit their practices. It also exposes the imperfections of the socialist system of government to reveal the tendencies of human beings to twist and modify ideologies in ways that benefit themselves. This paper discards traditional thinking that Socialism is the government for the masses. With the characteristics described in the preceding sections, totalitarian Socialism seems to be a twin government with Fascism, where all civil liberties are suppressed and power is monopolized by a single leader or bureaucracy. This topic allows us to shed some light on why communist countries, such as Vietnam, are oppressive in nature, instead of providing social power to the working class. ...read more.