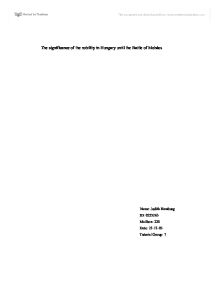 The significance of the nobility in Hungary until the Battle of Moh&amp;aacute;cs.

The significance of the nobility in Hungary until the Battle of Moh�cs Name: Judith Hamburg ID: 0223263 Mailbox: 220 Date: 21-11-03 Tutorial Group: 7 In Hungary, the national question in the modern sense, began to arise only in the late 18th century ( Niederhauser, 1993). Until then the Hungarian nation was identified with the nobility. In 1514 the lawyer Istv�n Werb�czy wrote in the "Tripartitum", a collection of laws and especially of the rights of noblemen, that the "Populus hungaricus was the community of noblemen [or] 'freemen' " ( Ignotus, 1972, p. 31). The great majority of the population- Werb�czy called them the 'plebs'- were excluded from this notion of nation. Although the "Tripartitum" did not become an official code of law, its content remained decisive until the revolution of 1848. And based on the distinction of the population into free and unfree people which originates from the structure of the tribal society before 970, the common linguistic use of the term "natio Hungarica" also refers only to the noble class, before 1514 as well as until the beginning of the 19th century ( Evans, 1986, p. 180). These definitions reflect the great political power the nobility in Hungary had over many centuries. The first Christian king of Hungary, Istv�n or St. Stephen, defeated the power of the tribal oligarchs and continued the efforts of his father G�za to establish a strong centralized power. Under the dynasty of the �rp�ds1, which lasted from 972 until 1301, and under the reign of the three Anjou kings (1301-1437), the power of the estates was limited by strong monarchs. ...read more.

against immigrants, non-Christians, traders, and the serfs who formed the mass of the people." (Ignotus, 1972, p. 25). It happened around this time that this group of different kinds of lesser nobles transformed into a unique estate. This was also written down officially in 1351 in a law which defined the different social classes. The lesser nobility built the core of the "natio Hungarica" 2 until the nineteenth century. B�la IV (1235-1270) showed efforts to annul some of the land-donations of Andrew and to oppose the will of the oligarchs. But his options were ruined by the Mongols, who attacked and destroyed Hungary in 1241. In the interests of the defense and reconstruction of his country he gave up the direct opposition to the oligarchs and furthered the lesser nobility by privileges. The monarch hoped to create a balance of power between them and the higher nobility, i.e. the oligarchs. After the death of B�la IV and two of his successors, a struggle between various dynasties and the reign of the very weak king L�szl� IV (or Ladislaus) furthered the strengthening of the oligarchs. At the end of the thirteenth century they had established twelve territorial units through which they ruled most parts of the country. When Andrew III, the last monarch of the �rp�d dynasty, died in 1301, Hungary became an elective monarchy. The dynastic principle remained important, but the right to elect a king became another powerful political means which laid in the hands of the nobility. ...read more.

The largest one was ruled by the military government of the Turks. Transylvania had to promise loyalty to the Sultan, but managed to keep its inner affairs independently. The rest of the country was under the reign of the Habsburgs. While in Western Europe souvereign states emerged, Hungary was divided for 150 years. The impacts of this division and occupation were crucial for the further development of the country. For example the Turkish troups carried off many people from both genders (and even children) into slavery when they moved home after the battles. They also plundered whole villages and destroyed the economical fundament of Hungary (Bogyay, 1977, pp. 88-89). The population diminished enourmosly: in 1600 one and a half million less people inhabited the hungarian territories than at the end of the Middle Ages. We can clearly see that a main cause why Hungary was not able to defend itself against the Turks and thus besides the occupation of large parts of its territory also became dependant on the Habsburgs until the first world war, was the unappeasable cupidity for power of the nobility. This power served only a slight elite of the population and this elite ignored or did not acknowledge that they led a whole country into the downfall. The oligarchs destroyed the centralized state of Matthias Corvinus without further deliberation. Today we can see that for Hungary at that time, the ambitions of Matthias were in some respect the last chance to catch up with the developments in Western Europe and to save his realm from the Turks who were expanding westwards since the late fourteenth century. ...read more.