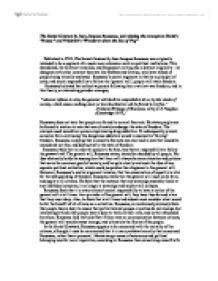 The Social Contract by Jean-Jacques Rousseau, and relating the concepts to David's "Brutus" and Friedrich's "Wanderer above the Sea of Fog" Published in 1762, The Social Contract by Jean Jacques Rousseau was originally intended to be a segment of a much more extensive work on political institutions. This abandoned, the Contract remained, and Rousseau's writing has a distinct originality - he disagrees with other contract theorists like Hobbes and Grotius, who have talked of people being virtually enslaved. Rousseau's central argument is that by a principal of unity, and social responsibility to follow the 'general will', people will attain freedom. Rousseau believed that collective person following their own law was freedom, and in this theory, an interesting paradox emerges; "whoever refuses to obey the general will shall be compelled to do so by the whole of society, which means nothing more or less that that he will be forced to be free." -Political Writings of Rousseau, ed by C.E Vaughan (Cambridge 1915.) Rousseau does not state that people are forced to commit free acts. He states people can be forced in relation to acts that can ultimately endanger the state of freedom. ...read more.

Maintaining a sense of autonomy and political belonging was far more imperative, according to Rousseau than concerning oneself with personal liberty. If collectively, the people always considered the impact of actions and events on the society as a whole, then the general will would be preserved, as would the liberty of the people. The concepts brought forward by Rousseau, can also be seen in the following paintings - The Lictors Returning to Brutus the Bodies of his Sons (1789) by Jacques-Louis David, and The Wanderer above the Sea of Fog (1818) by Caspar David Friedrich. Dealing with David's painting; clearly here we have a representation of a traumatic event. The father, Brutus having just ordered the deaths of his two sons out of obligation to his oath to get rid of the monarchy, has their bodies returned to him. It is a painting that has great impact. We see Brutus sitting facing away from the bodies of his sons, with a look of indifference, his body shrouded by shadow, as if to emphasize his deed. Brutus is painted as the epitome of power and authority. While we see his weeping family overcome by the tragedy, he sits apparently unaffected, and neglecting to offer comfort or emotion. ...read more.

It is almost unimportant, for the message is a man absorbed in a contemplative encounter with nature. According to Friedrich's own writings, all the elements in the composition of his paintings have symbolic significance. Friedrich's clear lighting, cool colours and sharp contours increase the feeling of solitude and reflection. The message Friedrich is sending us is that to find our actual path in life, we must separate ourselves from daily binds, and contemplate on a higher, more fulfilling ideal, our true self. During the revolution many people found they could relate to Rousseau's writings and philosophical ideas, just in the same way as Jean-Louis David and his paintings. Both these influential people helped to ignite a passion amongst the French general public and change French politics. Friedrich too was influenced by philosophical ideals and had great patriotic backing for the restoration movement following the Napoleonic wars. He had an interest and desire for human enlightenment, and this is represented in many of his works. To understand the works of Rousseau and the paintings of David and Friedrich, we must have an understanding of political and social context. We must acknowledge that artistic interests were very often interlinked with wider social issues at the time, and bear this in mind when looking at the concepts that have arisen. ...read more.