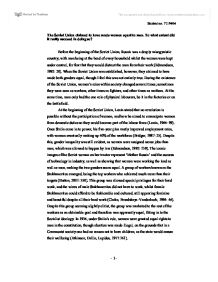 The Soviet Union claimed to have made women equal to men. To what extent did it really succeed in doing so?

The Soviet Union claimed to have made women equal to men. To what extent did it really succeed in doing so? Before the beginning of the Soviet Union, Russia was a deeply misogynistic country; with men being at the head of every household whilst the women were kept under control, for fear that they would distract the men from their work (Edmondson, 1992: 20). When the Soviet Union was established, however, they claimed to have made both genders equal, though I feel this was not entirely true. During the existence of the Soviet Union, women's roles within society changed several times; sometimes they were seen as workers, other times as fighters, and other times as mothers. At the same time, men only had the one role of physical labourers, be it in the factories or on the battlefield. At the beginning of the Soviet Union, Lenin stated that no revolution is possible without the participation of women, and how he aimed to emancipate women from domestic duties so they could become part of the labour force (Lenin, 1966: 99). Once Stalin came in to power, his five-year plan vastly improved employment rates, with women eventually making up 40% of the workforce (Bridger, 1987: 25). ...read more.

People were still uneasy about women fighting and killing in the war, but the women explained that they used their maternal instincts when fighting. At home, women took over the roles men had left behind in order to fight in the factories and on the fields, often working their way up into good jobs during the men's absence. Once the war was over, however, men came back from war and many women were forced out of these jobs, as the men were given good jobs as a reward for fighting for their country (Atkinson, Dallin, Lapidus, 1977: 174). This shows there was still an unequal division between the genders, despite the amendment of the constitution in 1936, as the men were clearly still seen as the main workers within the family. Following the war, the population had suffered a dramatic decrease from the fatalities on the battlefield, and the Soviet Union needed its population to be replenished. This was obviously down to the women to provide, and women who gave birth to several children during this pro-natal drive were given medals for their valuable service (Edmondson, 2001: 169). ...read more.

Brezhnev stayed in power for a very long time, until 1982, when he was succeeded by Yuri Andropov who died soon after, himself being succeded by Konstantin Chernenko. This period is known as a period of stagnation, when little of interest occurred regarding the rule of Russia. When Chernenko died in 1985, however, Mikhail Gorbachev came to power and further devoted the government to a population increase. Women were offered 3 years of paid maternity leave as the main incentive to bear children, and because of this many women decided to devote themselves more to having a family than working and having a career (Edmondson, 1992: 190). The Soviet Union came to an end in 1991, with Gobachev being its final leader. In conclusion, I believe the Soviet Union did not make women equal to men to a great extent, and that women had an unsteady role within society, sometimes being workers, sometimes mothers and sometimes even fighters, whilst men merely provided practical labour. Women still had to deal with family and domestic duties whilst working, and often large families which would have been hard to look after were promoted. The Soviet Union portrayed itself as a gender-equal, but I feel that for the reasons outlined above, it still had an awful lot to do before this ideal would actually have been realised. ...read more.