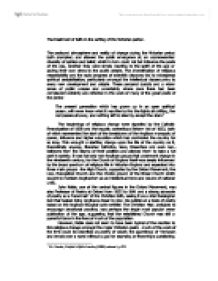 The treatment of faith in the writing of the Victorian period.

The treatment of faith in the writing of the Victorian period. The profound atmosphere and reality of change during the Victorian period both prompted, and allowed the public emergence of, an unprecedented diversity of opinion and belief, which in turn could not but influence the poets of the day, whether they were simply reacting to the spirit of the age or adding their own views to the public debate. The diversification of religious respectability and the rapid progress of scientific discovery led to widespread spiritual destabilisation, particularly amongst the intellectual classes privy to every new development and debate. These personal doubts and a wider sense of public unease and uncertainty where once there had been complacent certainty are reflected in the work of many of the great poets of the period The present generation which has grown up in an open spiritual ocean...will never know what it was like to find the lights all drifting, the compasses all awry, and nothing left to steer by except the stars.1 The beginnings of religious change were signalled by the Catholic Emancipation of 1829 and the equally contentious Reform Act of 1832, both of which represented the start of the breakdown of the Anglican monopoly of power, influence and higher education which had dominated the country for so long. This wrought a startling change upon the life of the country as it, theoretically anyway, liberated Catholics, Jews, Dissenters and even non-believers from the stigma of their position and allowed them to take a full part in society. It was not only non-Anglican groups that underwent change in the nineteenth century, for the Church of England itself was deeply influenced by the broad spectrum of religious life in Victorian England and separated into three main groups -the High Church, supported by the Oxford Movement, the Low, Evangelical Church and the middle ground of the Broad Church which sought to maintain Anglicanism as an intellectual force and source of national unity. ...read more.

Science had undermined Christianity but, like Tennyson, Britain was not yet able to fully accept and fill the chasm it had left in society and ideas. Arnold was not able to compensate, as others such as Swinburne, and later Hardy, did, by elevating nature to a position of control and interaction with mankind, for he saw a sharp division between humanity and the natural world. Nature functions without any human intervention and to try and connect us to it is to confuse two separate planes of existence. Man must begin to know this, where Nature ends; Nature and man can never be fast friends ('In Harmony with Nature, 12-13). Although Gerard Manley Hopkins has often been seen as unrepresentative of the age, both in the innovative style of his poetry and in his religion, he was affected by many of the same concerns and personal crises as his contemporaries and this is reflected in his work, albeit dealt with in a rather different way. He too was greatly influenced by a spiritual crisis and a radical change to his religious belief, but he moved contrary to the general tide, reacting to his increasing theological and emotional dissatisfaction with the Anglican church by seeking spiritual fulfilment in Catholicism rather than rejecting the notion of a god altogether. Thus his poetry is not that of doubt, but of intense and burning faith. He saw nature as an embodiment of God's beauty and bounty and his nature poems are often intensely spiritual, such as 'Hurrahing in Harvest', where the description in the first verse prompts the poet to notice God in the landscape And the azurous hung hills are his world wielding shoulder Majestic -as a stallion stalwart, very violet-sweet!. In 'The Windhover', dedicated 'To Christ our Lord', he captures the beautiful inscape (a subject's unique distinguishing characteristics) of the bird and its movement, marvelling at the mastery of God in its creation of it, suggesting that any object or feeling is an expression of the almighty ...read more.

Though before thee the throned Cytherean be fallen, and hidden her head, Yet thy kingdom shall pass, Galilean, thy dead shall go down to thee dead. ('Hymn of Prosephine') Religion in nineteenth century Britain was problematic as it had never been before, riven by schisms both within the Anglican Church and between it and the increasing number of other Christian denominations fighting for the intellectual and spiritual faith of the country. Many, such as Hopkins, found respite from this instability and variation in other branches of Christianity now that the way was open to them. Darwin's On the Origin of Species was published in 1859, further complicating the situation by encouraging questioning of the very validity of religion. Personal spiritual crises, and the perception of a wider public unease inspired many to express their anxieties through their poetry and their doubt is often reflected in the contradictions, disunity and a nostalgic historic setting that are particularly common in the early and mid Victorian poetry of Tennyson, Arnold and Browning. Unsurprisingly, this transition left many of the great poetic minds of the age wracked by spiritual crises and searching for an alternative to fill the gap religion had left, whether it be the highly individual -and perhaps vacillating- faiths based on love found by Browning and Tennyson or the culture and Christian morality championed by Arnold. Some, such as Swinburne, chose nothing at all and instead became militant atheists, but all questioned and worked through their 1 J.A. Froude, Carlyle's Life in London, (1884) volume 1, p.291 2 Cited in Gerard Manley Hopkins and the Victorian Temper, Alison G. Sulloway, (London 1972), p.1 3 Poems of Tennyson, (Oxford 1904), used throughout 4 Christopher Ricks, Tennyson, (1972), p.116 5 quoted in Hallam Lord Tennyson's Alfred Lord Tennyson: A Memoir, (1897), p.304 6 Matthew Arnold, Selected Poems, (London, 1994) 7 The Correspondence of Gerard Manley Hopkins and Richard Watson Dixon, ed. Claude Colleer Abbott (London, 1955) 8 Gerard Manley Hopkins, from lecture notes on Poetry and Verse, 1874 9 Robert Browning, Men and Women and other poems, London, 1993) ...read more.