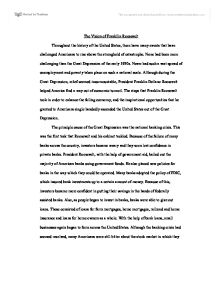 The Vision of Franklin Roosevelt

The Vision of Frankilin Roosevelt Throughout the history of the United States, there have many events that have challenged Americans to rise above the stronghold of catastrophe. None had been more challenging than the Great Depression of the early 1930s. Never had such a vast spread of unemployment and poverty taken place on such a national scale. Although during the Great Depression, relief seemed insurmountable, President Franklin Dellano Roosevelt helped America find a way out of economic turmoil. The steps that Franklin Roosevelt took in order to enhance the failing economy, and the inspirational opportunities that he granted to Americans single handedly ascended the United States out of the Great Depression. The principle cause of the Great Depression was the national banking crisis. This was the first task that Roosevelt and his cabinet tackled. Because of the failure of many banks across the country, investors became weary and they soon lost confidence in private banks. President Roosevelt, with the help of government aid, bailed out the majority of American banks using government funds. ...read more.

During the Great Depression, there was a long list of relief programs to provide jobs and income for unemployed Americans. The major agency set up by the government was the NRA, or the National Recovery Administration. The NRA made it possible for fair business competition across American industry. Under these codes, the troubles faced in the workplace were wiped out. Child labor for one had now been eliminated, creating a better opportunity for those that had been unemployed and for children that had been treated unfairly. The President also approved a minimum wage in the workplace. Minimum wages had slowly begun to raise the standard of living in each state and acted as an incentive for the unemployed to venture back out into to the workplace. All together, more than 4 million people had been reemployed and started earning better wages for their families. Another agency that Roosevelt had established was the Industrial Recovery Program. The Industrial Recovery Program created jobs and public works programs for men that needed employment. ...read more.

The unity between these two gave a promising outlook on a terrible crisis. In conclusion, the actions of Franklin Roosevelt during the Great Depression were incredibly vital to the United States and livelihood of its people. Roosevelt primarily solved the national banking crisis not only by bailing out privately owned banks, but also by placing new regulations on investments. These included the Security exchange Act and FDIC. Roosevelt secondly created many jobs and public works programs in order to give unemployed Americans an opportunity to earn wages. Along with these new opportunities came new rights such as the end of child labor and the formation of a minimum wage. Finally, and most importantly, President Roosevelt symbolized an American hero. During his public speeches and fireside chats, he inspired millions to work towards the future of their country. His attitude and mentality served as a sign of hope for skeptical investors and downtrodden work force. The steps that Franklin Roosevelt took in order to enhance the failing economy, and the inspirational opportunities that he granted to Americans single handedly ascended the United States out of the Great Depression. ...read more.