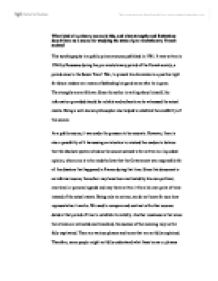 This autobiography is a public primary source published in 1781. It was written in 1766 by Rousseau during the pre-revolutionary period of the French society, a period close to the Seven Years' War, to present his chronicles

What kind of a primary source is this, and what strengths and limitations does it have as a source for studying the state of pre-revolutionary French society? This autobiography is a public primary source published in 1781. It was written in 1766 by Rousseau during the pre-revolutionary period of the French society, a period close to the Seven Years' War, to present his chronicles in a positive light for future readers as a means of defending his good name after he is gone. The strengths are as follows: Since the author is writing about himself, the information provided should be reliable and authentic as he witnessed the actual events. Being a well-known philosopher also helped to establish the credibility of this source. As a public source, it was under the pressure to be accurate. However, there is also a possibility of it harnessing an intention to mislead the readers to believe that the absolute system is bad as the source seemed to be written in a lop-sided opinion, where one is to be made believe that the Government was responsible for all the disasters that happened in France during that time. ...read more.

This document also unwittingly shows that the ruler, Louis XV was a weakling and lazy man who had no control over the state affairs, leaving them to the hands of his mistress and councils of ministers. Had he been a capable, enthusiastic and fair ruler, there wouldn't be so much oppositions and disorders in his court and there would be a fairer system in choosing the right candidate to hold the suitable position in the office. Wittingly 1. Break up of constitution 2. disasters of the unfortunate war - 3. Financial disorders system of 'progressive taxation' whereby people were taxed in accordance with how much they earned. The taxes which were imposed restricted the growth of industry and trade and the increase in food prices led to riots among the lower classes. The French government did not seem to be able to manage their finances so that the economy would improve and the people would feel fairly treated. In conclusion, the ancien regime was clearly an outdated, old fashioned system which was biased towards the wealthy and did nothing to improve the French economy. Instead of making France more powerful the ancien regime heightened tensions within the country and created unrest among the peasants who began to resent ...read more.

Outbreak of revolution 1789 When Louis XVI finally called the Estates General to solve financial difficulties, the Third Estate did not agree with the unfair system of the Estates General. They formed the National Assembly to make a constitution. People were afraid that the king would suppress the National Assembly. They were also discontented that the king dismissed Necker, the popular Finance Minister. The hungry Parisians, who suffered from bad harvest, burst out their anger by attacking the Bastille prison (for political prisoners). The Fall of Bastille started the French Revolution. It spread out to other parts of France. She made and unmade generals during the Seven Year�s War and helped to bring out the famous change of alliances. She wanted peace within France so it could be a strong world power. Although she was very ambitious, her life was still filled with frustrations, bitterness, and unhappiness. Throughout her life in the court, Madame de Pompadour was many times looked down upon by the French people. Coming out of the bourgeois class, this mistress and friend of the king was taking a role usually reserved for the aristocrats. Others saw her as a woman trying to seize power. Louis was lazy, and Madame de Pompadour prepared all business for the king's eye beforehand with the ministers, who met in her rooms at Versailles. ...read more.