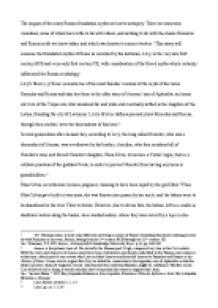 This essay will examine the foundation myths of Rome as recorded by the historian, Livy, in the very late first century BCE and very early first century CE,

﻿The origins of the many Roman foundation myths are lost to antiquity. There are numerous variations, some of which have little to do with others, and nothing to do with the classic Romulus and Remus myth we know today, and which was known to ancient writers.[1] This essay will examine the foundation myths of Rome as recorded by the historian, Livy, in the very late first century BCE and very early first century CE, with consideration of the Greek myths which certainly influenced the Roman mythology. Livy's History of Rome recounts one of the most familiar versions of the myth of the twins, Romulus and Remus and also ties them to the older story of Aeneas,[2] son of Aphrodite, an heroic survivor of the Trojan war who wandered far and wide and eventually settled in the kingdom of the Latins, founding the city of Lavinium. Livy's History defines precisely how Romulus and Remus, through their mother, were the descendants of this hero.[3] Several generations after Aeneas' day, according to Livy, the king called Numitor, who was a descendent of Aeneas, was overthrown by his brother, Amulius, who then murdered all of Numitor's sons, and forced Numitor's daughter, Rhea Silvia, to become a Vestal virgin, that is, a celibate priestess of ...read more.

Romulus personally convinced the girls that they were getting a splendid opportunity to be properly and respectfully married, while also putting the blame on the girls' families for refusing the Romans' initial requests to seek brides amongst them. The abducted women were placated by their abductors charmingly pleading ?the irresistable force of their passion? which was ?effective beyond all others in appealing to a woman's nature?.[13] The girls were appeased, but the parents who had lost their daughters to the Romans were not so easily placated, and they petitioned their king and other neighbours for help, but the Romans simply gathered an army and ?taught them that anger is futile without strength.?[14] Many have found this story troubling. First, and most obviously to the modern mind, is the demeaning way in which the young women are treated, and the ridiculous ease with which they are brought to heel through cajoling, blame, and flattery. To the objection of the parents who have lost their daughters, the response is typically Roman: mount an army and teach them a lesson. Might makes right. Later in Livy's narrative, he goes so far as to blame the women for causing further war between the Sabines and the Romans, and the women, themselves, accept the blame.[15] Greek culture was also patriarchal, putting great restrictions on women. ...read more.

They put up supplications for his grace and favour, and prayed that he would be propitious to his children and save and protect them.? See: Livy History of Rome 1.1.16 [12] J.N. Bremmer, N.M. Horsfall 1987 Roman Myth and Mythography Bulletin Supplement 52, University of London Institute of Classical Studies. pp 26-27 [13] Livy, op. cit., 1.1.9 [14] Livy, op. cit., 1.1.10 [15] Livy, op. cit., 1.1.13 [16] Livy mentions brigands often, placing the young twins in association with them, although Livy takes care to note that the twins stole ill-gotten spoils from brigands and thieves to share with their own community of rural shepherds. It was when Remus was accused of a the crimes of a brigand, by brigands, that he was placed in the custody of his grandfather, Numitor, and put in the position of overthrowing the king. It seems likely that the twins were, or were rumoured to be, brigands, and Livy is addressing this tradition. In any case, it is clear that the twins were well-known to and by outlaws and brigands, and their bands of followers and rustic youths may well have included more than a few. See: Livy, op. cit., 1.1.5, 1.1.6 ...read more.