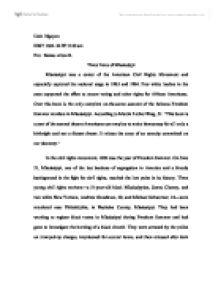 Linh Nguyen HIST 1302- M-W: 9:30 am Pro: Baines Alton R. Three Lives of Mississippi Mississippi was a center of the American Civil Rights Movement and especially captured the national stage in 1963 and 1964. Few white leaders in the state supported the effort to secure voting and other rights for African Americans. Over this book is the only complete on-the-scene account of the heinous Freedom Summer murders in Mississippi. According to Martin Luther King, Jr: "This book is a part of the arsenal decent Americans can employ to make democracy for all truly a birthright and not a distant dream. ...read more.

They had been working to register black voters in Mississippi during Freedom Summer and had gone to investigate the burning of a black church. They were arrested by the police on trumped-up charges, imprisoned for several hours, and then released after dark into the hands of the Ku Klux Klan, who beat and murdered them. It was later proven in court that a conspiracy existed between members of Neshoba County's law enforcement and the Ku Klux Klan to kill them. The murders not only shook the nation and shamed the state of Mississippi but also forced loose the iron grip of white supremacy in the South. ...read more.

He reveals not only the harrowing events in this heinous case but also the prejudice of ordinary citizens who allowed murder to serve as their defense of prejudice. He helps us know the young martyrs closely and introduces us to their killers and to the hatred and suspicion that led inexorably to murder. This Books edition includes Huie's report on the trial three years later. Nineteen local men were charged. Seven were found guilty of conspiracy but none of murder. William Bradford Huie (1910-1986), an Alabama journalist and novelist who fought prejudice and hypocrisy throughout his professional life, especially in his native South, wrote many books, including The Americanization of Emily, The Execution of Private Slovik, The Revolt of Mamie Stover, Mud on the Stars (all made into films), and Wolf Whistle, the story of the Emmett Till lynching. ...read more.