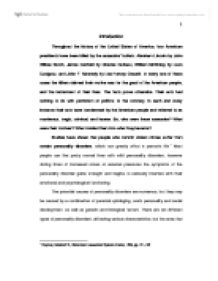 Throughout the history of the United States of America, four American presidents have been killed by the assassins' bullets, so, who were these assassins? What were their motives? and what molded them into what they became?

Introduction Throughout the history of the United States of America, four American presidents have been killed by the assassins' bullets: Abraham Lincoln by John Wilkes Booth, James Garfield by Charles Guiteau, William McKinley by Leon Czolgosz, and John F. Kennedy by Lee Harvey Oswald. In every one of these cases the killers claimed their motive was for the good of the American people, and the betterment of their lives. The facts prove otherwise. Their acts had nothing to do with patriotism or politics; to the contrary, in each and every instance their acts were condemned by the American people and referred to as murderous, tragic, criminal, and insane. So, who were these assassins? What were their motives? What molded them into what they became? Studies have shown that people who commit violent crimes suffer from certain personality disorders, which can greatly affect a person's life.1 Most people can live pretty normal lives with mild personality disorders, however during times of increased stress or external pressures the symptoms of the personality disorder gains strength and begins to seriously interfere with their emotional and psychological functioning. The potential causes of personality disorders are numerous, but they may be caused by a combination of parental upbringing, one's personality and social development, as well as genetic and biological factors. There are ten different types of personality disorders, all having various characteristics; but the ones that are more prevalent in crime are: Antisocial Personality Disorder2, characterized by a disregard for other people's rights and feelings, often crossing the line and violating those rights. This pattern of behavior begins around the age of 15, and consists of the majority of these symptoms: failure to conform to social norms, deceitfulness, impulsivity, engaging in repeated physical fights or other acts of violence, reckless disregard for their safety and that of the others, repeated failure to sustain consistent work behavior or honor financial obligations, and lack of remorse. ...read more.

Contemporary assassins...almost always prove to be exceptionally deranged individuals. Some of them, in fact, appear to have few or no political motives."37 In the case of Charles J. Guiteau, he was a psychopath, mean and vicious who committed his antisocial acts with deliberation and intensity. Confused, yet mentally competent if given support and guidance, had the potential of becoming psychotic if his needs were ignored too long. Guiteau did not have a political motive for shooting President Garfield; if anything his motive was for being denied a cherished diplomatic assignment. Growing up, Guiteau suffered frequent beatings at the hands of his father. From an early age he was delusional and barely capable of distinguishing fantasy from reality. He wanted to be important, imagined himself to be a succession of great persons, and the more he would think about it the more he would believe it to be true. When he joined the Oneida Community, Guiteau openly stated that he was ordained to be in charge and lead, clearly manifesting a delusional state of mind, to say the least. During most of his life, Guiteau tried to devise schemes to achieve greatness, only to fail miserably and be considered a lunatic. Even though resourceful and canny, he never managed to carry out a project for too long. He went from seeing himself as a lawyer, to being a preacher, a political speech-writer, an ambassador to Vienna or Paris, to ultimately the savior of the Republican Party, the Stalwart of Stalwarts. Clark, reports that when Guiteau bought the murder weapon, a pearl-handled pistol, he paid with ten dollars of borrowed money, and rejected a less expensive hard-rubber-handled model, saying that his choice would look better in a museum."38 He always wanted to be someone else, but this time he thought he found the way to achieve greatness and be remembered for it. Leon Czolgosz 1873-1901 Leon Czolgosz was born in 1873, in Detroit, Michigan, to a Polish-Russian couple of who had immigrated to America during the 1860s. ...read more.

The delusional side of Oswald was manifested in the form of delusion of control and delusion of grandiose70 He continuously reported to the Russians that the US government, the FBI were following him and had him under surveillance; he even made himself believe that he even lost his job due to FBI harassment. Oswald felt that he would be very well received by the Russians, and that he definitely was valuable, partly due to the knowledge he gained in the Marines. These delusion of grandiose was also demonstrated when he went to the Cuban Embassy in Mexico City. He had no doubt that, after shooting Walker, appearing on radio shows, supporting the Communist-Cuba cause, and distributing "Hands Off Cuba" handbills, Cuba and the Soviet Union were going to give him a card-blanche. James Clarke in his book American Assassins speculates that it was a string of disillusionments and his failure to get acceptance, like the one in the Soviet Union, where he even attempted suicide, the incident at the Cuban Embassy, or his wife's remainder of her past lovers, and the FBI visits that brought about the President's assassination.71 These definitely were stressors that coupled with Oswald's personality, the delusional-paranoid type, armed with a scoped rifle and sharing the same place (weapon-range) and time with President Kennedy translated in tragedy. Conclusion As depicted in the profiles of these four presidential assassins, despite their individual differences in personality traits, they share a common set of behavioral and background characteristics. Their families did not support them, their peers did not accept them, and their efforts to achieve success were not rewarded. All four presidential assassins, showed a distinct pattern of inadequacy in dealing with social, intellectual, and occupational challenges and a lack of means for achieving satisfaction or substantial goals. This combination of inadequacy, failure, and chronic inability to be able to do the right thing, or achieve a sense of accomplishment, ultimately made these individuals seriously and fatally dangerous. Overall, their targets symbolized the frustrations they experienced and personified the system that, in their minds, was always keeping them down. ...read more.