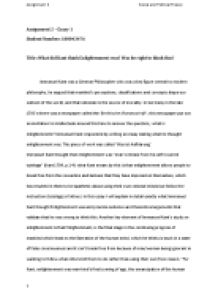 Title: What did Immanuel Kant think Enlightenment was? Was he right to think this?

﻿Assignment 2 Social and Political Theory Assignment 2 ? Essay 1 Student Number: 100043476 Title: What did Kant think Enlightenment was? Was he right to think this? Immanuel Kant was a German Philosopher who was a key figure central to modern philosophy, he argued that mankind?s perceptions, classifications and concepts shape our outlook of the world, and that rationale is the source of morality. In Germany in the late 1700?s there was a newspaper called the ?Berlinische Monatsschrift?, this newspaper put out an invitation to intellectuals around this time to answer the question,: what is enlightenment? Immanuel Kant responded by writing an essay stating what he thought enlightenment was. This piece of work was called ?Was ist Aufklarung?. Immanuel Kant thought that enlightenment was ?man?s release from his self incurred tutelage? (Kant 1784, p.1-4) what Kant means by this is that enlightenment allows people to break free from the cowardice and laziness that they have imposed on themselves, which has resulted in them to be apathetic about using their own rational minds but follow the instruction (tutelage) of others. In this essay I will explain in detail exactly what Immanuel Kant thought Enlightenment was and provide evidence and theoretical arguments that validate that he was wrong to think this. ...read more.

Kant believes that to be mature and enlightened it requires energy and effort so it may be that we have very good reasons to be wanting to pass on the job of thinking for ourselves to others. However, I disagree with Kant because I don?t believe it is just an act of will to become enlightened, and that it is much harder for an individual to decide that they?re going to think for themselves now, instead of relying upon authority figures and others to do the thinking for them. Kant refers to a term in his essay; ?chained to dogma?s? which means stuck in a system of belief which is familiar and in the context of enlightenment. What he means by this is that it is hard for individuals to be courageous to use their own reason and understanding because if these ?chains? were to be broken the individual themselves would be unfamiliar to the new way of thinking and of the ability to be able to think freely and may accidently fall in to the trap of following other new narrow-minded ways of thinking to easily. As well as there being factors that involve the individual for there to be an enlightenment in a community or just for them to be enlightened themselves, there also has to be several conditions that help to spread enlightenment in area of society, they being freedom; freedom of speech is necessary for there to be freedom of thinking. ...read more.

However, Kant has been criticised in this area by ?Friedrich Hegel?, who alleged that ?the enlightenment failed to produce any set of beliefs which could possibly replace religious faith? (Outram 2005, p.112-113). In conclusion Immanuel Kant does put forward several explanations as to what The Enlightenment is and argues compellingly why it is the case. However, bearing in mind that no philosophers can collectively agree on what enlightenment is, even those who consider themselves inspired by Kantian thinking don?t entirely agree with Kant. ?Kant and his fellow contributors to the discussion in Berlin in the early 1780?s could reach no agreement regarding the bounds of Aufklarung? (Munck 2000, p.7) This makes his views seem somewhat abstruse and unperceivable , Kant does make some compelling arguments about enlightenment and I do agree with a small minority of them but overall I believe his way of thinking and his larger explanations of what enlightenment is are incorrect and there is much more to it than how someone is able to break free from their ?self incurred tutelage? (Kant 1784, p1-4) I believe we need to look deeper at how relevant or irrelevant to us the enlightenment is because we have transitioned into a new epoch of history which is entirely diverse from the era of rationale.? The Enlightenment?s social setting is no longer ours. Its values are not our own. What period does it belong to?? (Marsak 1972, p. ...read more.