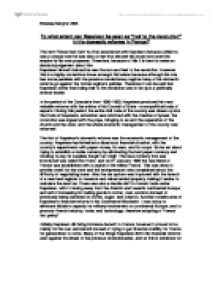 To what extent can Napoleon be seen as &quot;heir to the revolution&quot; in his domestic reforms in France?

To what extent can Napoleon be seen as "heir to the revolution" in his domestic reforms in France? The term "Great bad man" is often associated with Napoleon because while he was a unique ruler he was also a man that abused his power and used the empire for his own purposes. Therefore, because of this it is hard to make an absolute judgement about him. Napoleon himself claimed he was the son and heir to the revolution. However this is a highly contentious issue amongst historians because although his rule has some parallels with the previous revolutionary regime many of his domestic reforms go against the former regime's policies. Therefore it can be said that Napoleon rather than being heir to the revolution was in fact just a politically shrewd leader. In the period of the Consulate from 1800-1803, Napoleon produced his most valuable reforms with the advice of his Council of State - a non-political body of experts. During this period, the entire civil code of the country was drawn up into the Code of Napoleon; education was reformed with the creation of lycees; the concordat was signed with the pope, bringing to an end the separation of the church and the state; and the whole economic management of the country was reformed. ...read more.

It brought to an end the separation of the church and the state which went against the main principle of the revolution. It stipulated that clergy were fully paid civil servants, police controlled public worship, and there was toleration of other faiths. There was also no attempt to win back Church land after the National Assembly had confiscated all Church properties. Ultimately the Church was made a department of the State, removing it from the authority of the Pope. From this it is clear that Napoleon's religious reforms went against the ideas of the revolution. The revolution ha wanted to break the powers of the Church and seize its lands. Now Napoleon had made the church a department of the state. Therefore one can see that there is evidence that suggests that Napoleon cannot be seen as heir to the revolution. Another of Napoleon's domestic reforms was his reform of the legal system. When Napoleon came to power he inherited a chaotic legal system with no single set of laws. For example southern France had Roman law, but northern France had Teutonic Customary Law. All laws were basically down to the discretion of the absolute ruler at the time- "It is legal because I wish it". ...read more.

It was more coincidental that one eighth of children were in primary schools and that literacy rose dramatically. This is illustrated with the fact that Napoleon was not even in control of the primary schools. Napoleon simply wanted to build a stronger power base for himself, and used education to do it. The revolution would have wanted universal education as a right of all citizens. Napoleon used education as a means to his own ends, although education was still increased as a result. So, to conclude one can see that many aspects of Napoleon's reforms did benefit France and followed the same direction as the revolutionaries that preceded him, so in that sense he can be seen as the heir to the revolution to an extent. However, the number of his ideas that are against the revolution outweigh those that are for it. This coupled with him turning France into a mild "police state", where spies and secret police were always around, and where propaganda and censorship was very tight, all lead us to draw one conclusion that he was in fact not heir to the revolution. Therefore he can be seen as a unique ruler of France, but a ruler that only brought about reforms for self-interest and to create a strong power base for himself. ?? ?? ?? ?? Robdeep Sangha L6SB ...read more.