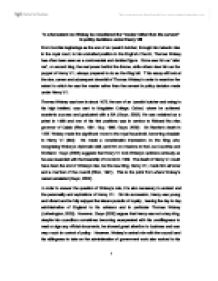 To what extent can Wolsey be considered the "master rather than the servant" in policy decisions under Henry VIII From humble beginnings as the son of an Ipswich butcher, through his meteoric rise in the royal court, to his unrivalled position in the English Church, Thomas Wolsey has often been seen as a controversial and derided figure. Some see him as "alter rex", or second king, the real power behind the throne, while others view him as the puppet of Henry VIII, always prepared to do as the King bid. This essay will look at the rise, career and subsequent downfall of Thomas Wolsey in order to examine the extent to which he was the master rather than the servant in policy decision made under Henry VIII. Thomas Wolsey was born in about 1472, the son of an Ipswich butcher and owing to his high intellect, was sent to Magdalen College, Oxford, where he achieved academic success and graduated with a BA (Gwyn, 2002). He was ordained as a priest in 1498 and one of his first positions was in service to Richard Nanfan, governor of Calais (Elton, 1991, Guy, 1990, Gwyn, 2002). On Nanfan's death in 1507, Wolsey made the significant move to the royal household, becoming chaplain to Henry VII (ibid). He made a considerable impression on the King who, recognising Wolsey's diplomatic skill, sent him on missions to the Low Countries and Scotland. ...read more.

Furthermore he quotes a letter from Henry to the Pope extolling Wolsey having "laboured and sweated" more than anyone for the peace. The cost of financing wars was high and Henry spent �1.4 million between 1511 and 1525, whilst his income was only �110,000 per year (Ross, 2001). In order to raise the funds needed to satisfy Henry's warring intentions, Wolsey implemented the Amicable Grant in 1525. This forced loan was incredibly unpopular with both parliament and taxpayers, eventually leading to signs of armed disturbances in East Anglia and Kent against Wolsey himself rather than the King who was the one really in need of the money (Elton, 1991). Eventually Henry had to perform a dramatic climb down and call off the grant. As Elton suggests, this was the first time that Henry began to question his faith in Wolsey. At home, Wolsey's main policy interest was the law and after his appointment as Lord Chancellor in 1515, he oversaw the Court of Chancery and the Court of Star Chamber (Lotherington, 2003). Under Wolsey, the Star Chamber took on a renewed vigour, with Wolsey attending the chamber most frequently, whilst Henry, who rarely attended official meetings, relied on his minister to inform him of the outcomes either in person or in writing. Guy (1995) argues that Wolsey did not seek out the position as Lord Chancellor to fuel his power hungry aspirations, as neither his predecessors nor Cromwell after him managed as much influence over the King as Wolsey achieved. ...read more.

Elton suggests that Wolsey failed in his task because he was torn between his loyalty to the papacy and his loyalty to the King. Gwyn (2002 pp 598) has a simpler explanation saying that "in the end Henry loved Anne more than he loved Wolsey". Guy (1990) argues that as Henry did not leave Wolsey entirely bereft of all his offices, leaving him with both the Archbishopric of York and the Bishopric of Winchester, this could demonstrate that Henry intended to re-employ his minister at a later date. In order to answer the question of whether Wolsey was the master or the servant in policy decisions under Henry VIII, this essay has shown that although Wolsey demonstrated great skill in administration and was an exceptionally hard worker, Henry VIII was still in overall charge. Wolsey could be seen to be a sycophant, courting favour with the King in order to further his own wealth and career. During the early years of Henry's reign, it is possible that Wolsey could be seen as the master, purely because the youthful Henry was caught up in more amusing affairs. However, Henry always devised policy but left Wolsey to carry it out. Henry recognised Wolsey's abilities and utilised them, but whilst Henry could easily remove Wolsey, Wolsey as a servant of the King was not able to remove Henry. In conclusion, the evidence suggests that Henry VIII and Wolsey formed an effective partnership, but Wolsey was always Henry's servant. ...read more.