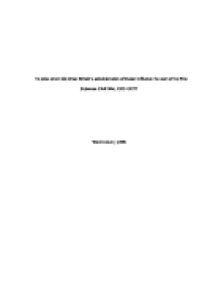 To what extent did Great Britains administration of Sudan influence the start of the First Sudanese Civil War, 1955-1972?

and "[the Northerners] do not seek opportunities of exploiting backward tribes in the South" ("Proc. of the Juba" 1). Section C. Evaluation of Sources The most important source for this investigation was the work Sudan: A Country Study written by Helen Chaplin Metz for the Library of Congress's Country Study series. The series is prepared by the Federal Research Division and sponsored by the Department of the Army. Its purpose is to provide a detail account of all aspects of the given country, including geography, demographics, and history, while giving specific attention to the views and beliefs of the country's people. Its value lies in that it is written by a non-Sudanese author and not published under the auspices of either Sudan or South Sudan, both fractions which would prevent a skewed account. Limitation-wise, bias and dramatization are possible as it states in the forward, "the authors strive for a dynamic rather than static portrayal" (Metz 6) and, because the work was published in 1991, the study would have occurred amidst the controversial Second Sudanese Civil War. There is also the possibility that because it was for a United States of America organization, it would be slanted towards the Christian South. ...read more.

The few Southern representatives knew English as lawfully required. By suddenly instituting Arabic as the language of government and not giving time for Arabic to be taught, these people were unable to participation and the south was left virtually unrepresented. Conversely to the above arguments, divisions between the North and South do predate the British. As the statement by Thomas Owen shows, even in 1947 the south still remembered the practice of slave raiding conducted by the North and its "oppression." It is also arguable that the British did not instigate the new southern policy rather international and northern Sudanese pressure, and noting the time period, the effects of World War II; however while these might have influenced British decision, the final actions and implementations were of Anglo-origin. Section E. Conclusion Civil wars are caused by two internal fractions fighting over ethnic, political, religious, and even ideological issues. The British, regarding the first Sudanese civil war, are responsible for augmenting these two fractions and, moreover, for placing them in a position where they would conflict by later supporting the North and South unification. This is demonstrable by looking at the British's bias towards the south, their original separation of the South, and the sudden 1940's policy change. In conclusion then, while the British did not directly spark the fighting, they exacerbated is not created the root causes. Section F. ...read more.