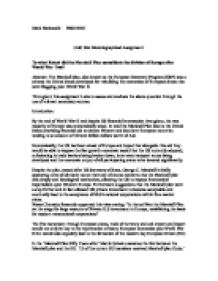 To what Extent did the Marshall Plan consolidate the division of Europe after World War Two?

Mark Hardcastle P08254387 Cold War Historiographical Assignment: To what Extent did the Marshall Plan consolidate the division of Europe after World War Two? Abstract: The Marshall plan, also known as the European Recovery Program (ERP) was a scheme the United States developed for rebuilding the economies of European States that were flagging, post World War II. Throughout this assignment I aim to assess and evaluate the above question through the use of relevant secondary sources. Introduction: By the end of World War II and despite US financial intercession throughout, the vast majority of Europe was economically weak. In total the Marshall Plan lead to the United States providing financial aid to sixteen Western and Southern European countries totaling to an amount of thirteen billion dollars worth of Aid. Economically, the US had been ahead of Europe and hoped that alongside this aid they would be able to impose the fast-growth economic model that the US currently adopted; culminating in trade barriers being broken down, inter-state transport routes being developed and the economic output of all participating states to be boosted significantly. Despite the plan, named after US Secretary of State, George C. Marshall initially appearing to be of altruistic nature there are of course concerns that the Marshall plan was simply and Ideological mechanism, allowing the US to impose Economical imperialism upon Western Europe. ...read more.

Never the less, the USSR's rejection to the plan set the tone for the treatment of the satellite states under the Soviet Unions power. Economically and Ideologically at the time, it did not make sense for the US to invite and Soviet state to the Marshall plan as they would not conform with the socio-economic structures the US imposed upon any member states. Former Soviet Foreign minister Vladimir Yerofeyev stated that even though on some level the US made an offer to several satellite states, they would never have become members due to the previously listed western pressures conflicting with the existing ideologies of the Soviet Union. Yerefeyev said ""They understood what it meant. So at the last moment they were prevented. Nine countries refused to take part in the conference. Sixteen agreed. The Soviet Union and the socialist-oriented countries stayed away. So did Finland" "The US never really wanted the Soviet Union and its satellites to benefit from Marshall aid. They made no further effort to persuade them to take part." This is further reasoning to the belief that whilst perhaps the Marshall plan did not directly consolidate the divide in Europe, it forced either the Soviets or Countries that possibly, whilst neutral weren't protected under peace treaties, such as Finland in difficult positions. ...read more.

As Previously noted part of the brilliance of the Marshall Plan, from the US perspective at least was that it totally removed any of the decision making from themselves, this ultraistic act, handed over all responsibility to the Soviets; either accept Capitalist values and integrate them into society or denounce them and ensure any divide remained, regardless of whether the US Olive branch was genuine or not. It is impossible to argue otherwise, which would only really be possible if Vladamir Molotov did accept the Marshall Plan caveats put forward at the three powers conference it would have undoubtedly put the onus onto the US. Bar China, Korea and Finland, all relevant party states had been assigned a side in the Cold war, Charles S Miers supports this thinking "The Marshall plan, in effect, was the single most important policy in confirming but not initiating the division of Europe." Bibliography: I find it impossible to disagree with the notion that the Marshall plan only set in stone that which was pre-determined and in fact find myself far more inclined to be of the opinion that the Communist dismissal of the Marshall Plan leading to the satellite states falling further behind, than they would have otherwise done, more responsible for creating and consolidating the divide than otherwise. ...read more.