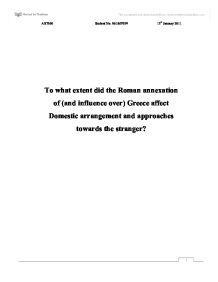 To what extent did the Roman annexation of (and influence over) Greece affect Domestic arrangement and approaches towards the stranger?

To what extent did the Roman annexation of (and influence over) Greece affect Domestic arrangement and approaches towards the stranger? Content: Page 1: Title Page Page 2: Contents Page Page 3: Introduction Page 4: Main Body Page 15: Conclusion Page 16: Bibliography - Ancient Authors Page 17: Bibliography - Modern Authors Page 20: List of Illustrations Introduction: Excavations focused upon Greek housing has mainly been dedicated towards the oikos of the Prehistorical, Classical and Hellenistic eras and the subsequent interpretation of spatial segregation and architecture within. However, many Scholars readily admit that there has been far too little analysis of Greek housing during the period of Roman rule from the late Republican era of the middle to late second century BC and onwards into Imperial rule; the impression that is given is that it had turned into a 'cultured backwater' (McKay 1975: 211). The aim in this project is to see how much Roman rule influenced the development of Greek housing in the Aegean. I shall do this by analysing the Roman domus and domestic setting before comparing it with its Greek counterpart and then attempt to make light of the changes the oikos underwent. Main Body: Much of the evidence we have for Roman housing comes from the ancient literary sources. Pliny's (the younger) letters contain a wealth of information about housing in the Early Imperial period. Andrew Riggsby's work comments upon the fact that Pliny's letters mention up to thirty-eight rooms distinctive rooms with thirty different room names but the description of room shape and content are minimal (2003: 170). Many of these room names are given in Greek as well as Latin. The use of Greek terminology may point towards extravagance and a sign of upper-class luxury (Riggsby 2003: 170). So what can Pliny's work tell us about the way that different parts of the household were considered on or off limits to the outsider? ...read more.

The house contained an alcove situated off the peristyle which is comparable with an alae but its oecus was in direct contrast to that of a Roman one - it was wider than it was long (Ellis 2000: 49). Rooms like this were used for dining but were also multifunctional. Smaller rooms alongside this broad room were sometimes found and could hold three couches for more private dining (Dunbabin 2003: 47). The more important visitor was likely to be a friend and thus was given access to these secluded rooms. Where service rooms can be identified, they show up alongside major reception rooms and can be entered from the main court and/or through entrance passages from major rooms, which indicates that there was no desire to try and hide the domestic side of the house from the 'public' side and therefore visitors, whether welcome or unwelcome were able to visually access this side of the household. It seems wealthy Delian homeowners were a lot less worried about visitors prying into their domestic life compared their ancestors. Decorative elements were so extensive in the peristyle, that space would have been restricted to the extent that they would have operated on a decorative level rather than a functional one (Nevett 1999a: 106). It is unclear, however, if domestic activities were fitted around the peristyle (Nevett 1999b: 165-6). In contrast with earlier period houses, domestic activities were assigned as low priority compared to entertaining guests. As the city was a trading haven and also given the fact that some business dealings took place at home with social peers and those of a level below, then it was natural for the owner to want to project a good image of him through his home (Nevett 1999b: 166). In this case the visitor would have been allowed into the most visually impressive rooms to negotiate and perhaps the more lavish the d�cor, then the more likely that the visitor would cement a deal? ...read more.

Interestingly, Apuleius describes in Metamorphoses how Hypata's house is large enough to host a dinner party, indicating that she held the party (Bradley 2000: 285). If we return to Athens, examples of house plans at the agora show two very simple arrangements based around a courtyard (Thompson and Wycherley 1972: 183-4, figs. 6 and 7). The decoration and construction suggests wealthy occupants and one of the house's courts is a decorated peristyle with an impluvium and a garden (Nevett 1999a: 106-7). This beatifying of the court reduced the possibility of it being used for domestic tasks. Over time, there was as shift in the way that activities were distributed around the house: the decorative role increasing at the expense of the domestic (Nevett 1999a: 107). As it became part of the Empire, and part of a wider economic network, domestic tasks were no longer on display to visitors. There was less constraint on movement around the house and a decrease in privacy features precipitated a decrease on restriction with visitors (Nevett 1999a: 107). Conclusion: As we can see, trying to compare the oikos with the domus can be somewhat problematic as before the Imperial period, there seem to be no uniform movement in Greece towards adopting the Italian style domus. Different cities had their own agendas. Where Athens was reluctant to change its ways, Corinth was quite happy to adapt. Delos was somewhere in between in that it developed with both Roman and Hellenistic stylistic features. Resistance to Roman rule soon wore off in the first and second centuries AD when houses began to adopt more lavish adornments as the empire grew more financially prosperous. Greece experienced a certain amount of social change during this period as increased wealth allowed home owners to buy more slaves to take care of domestic tasks and as a result, there was no need to hide away the female house members in the confines of the house. Initially, during the Republican era, there was little change from Roman influence but that increased exponentially during the Imperial period. ...read more.