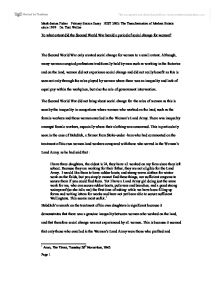 To what extent did the Second World War herald a period of social change for women?

To what extent did the Second World War herald a period of social change for women? The Second World War only created social change for women to a small extent. Although, many women occupied professions traditionally held by men such as working in the factories and on the land, women did not experience social change and did not really benefit as this is seen not only through the roles played by women where there was an inequality and lack of equal pay within the workplace, but also the role of government intervention. The Second World War did not bring about social change for the roles of women as this is seen by the inequality in occupations where women who worked on the land, such as the female workers and those women enrolled in the Women's Land Army. There was inequality amongst female workers, especially where their clothing was concerned. This is particularly seen in the case of Hebditch, a farmer from Stoke-under -ham who had commented on the treatment of his own women land workers compared with those who served in the Women's Land Army, as he had said that : I have three daughters, the oldest is 24, they have all worked on my farm since they left school. Because they are working for their father, they are not eligible for the Land Army. I would like them to have rubber boots, and strong warm clothes for winter work on the fields, but you simply cannot find these things, nor sufficient coupons to secure them if you could find them. ...read more.

age group of 19-24 were recruited.11 This significantly demonstrates that women did not receive social change because by only recruiting women who were only of these ages, this placed an obstacle to those women who were older and mature, who may had already experienced similar roles prior to the war. Furthermore, it seemed that there was no social change for women in these types of jobs because it seemed that only under half-a- million women were still working in the the Auxiliary Territorial Services and Women's Armed Forces by the end of the war in 1945.12 The armed forces was also an occupation that provided very little social change for women because it seemed that there was no equality between men and women, and therefore women particularly were looked on unfavourably. Malcolm Pearce and Geoffrey Stewart support this as they have argued that "despite the very active service engaged in by women in the armed forces, the old prejudices seemed still to be at work because technically they were non-combatant so that they could not possess the same skill and bravery."13 Pearce and Stewart make a strong argument here because although women joined the armed forces, it seemed that employers still held pre-war prejudices regarding s*x segregation. Such prejudices are significant in demonstrating that social change was hindered because it seemed that women were never really given a chance in such muscular jobs and therefore their male counterparts in the armed forces did not view or treat them on an equal footing.14 This inequality of women in the Armed Forces was further enhanced at the end of the war where the Women's Auxiliary Services were ...read more.

Women also never achieved social change during the war due to role of Government intervention. Harold Smith supports this as he argues that: "Government policies also helped ensure that the position of women would not be greatly altered by the war. The government mobilised the nations' woman power reluctantly, made pre-determined efforts to maintain its pre-war practice of s*x differentiation among its own employees and facilitated the movement of women workers back into the homes once the conflict had ended. "25 Smith makes a strong argument because it seemed that the Government did not really aid women to achieve better prospects during the war and to encourage them further. This is because it seemed at the start of the war that the Government had made it very clear that the roles of women during the war would not change and were only a temporary option, and therefore it appeared that the female pre-war domestic roles were to be restored once the war had finished. 26 The Second World War did not create a period of social change for women. Although, the war was a time when women could take on various roles and professions traditionally occupied by men, any social change or benefits that women achieved within these roles were ultimately limited and counter-productive. Not only was social change limited for women due to government intervention but also due to inequality and prejudice that was prevalent within the workplace. It was these obstacles that would need to have been overcome in order to successfully achieve female egalitarianism in the near future. ...read more.