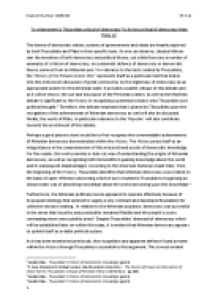 ﻿Student Number: 6044832 19.3.12 To what extent is Thucydides critical of democracy? Is he less critical of democracy than Plato is? The theme of democratic values, systems of governments and ideals are heavily explored by both Thucydides and Plato in their specific texts. As one can observe, classical Athens saw the invention of both democracy and political theory, yet while there are a number of examples of criticism of democracy, no systematic defence of democracy or democratic theory survives from an Athenian pen.[1] In relevance to the texts created by Thucydides, the ?History of the Peloponnesian War? represents itself as a particular text that delves into this interwoven discussion of great controversy on the legitimacy of democracy as an appropriate system for the Athenian state. It provides a subtle critique of this debate and as it will be shown, the use and discussion of the Periclean oration, as well as the Mytilean debate is significant to the History in recognising a potential window onto Thucydides own political thought.[2] Therefore, the delicate emphasis that is placed by Thucydides upon the recognition of the achievements of Athenian democracy as well will also be discussed. Finally, the works of Plato, in particular relevance to the ?Republic? will also contribute towards the enrichment of this debate. ...read more.

Although he apparently did not belong to the extreme wing of the Athenian oligarchic club who conspired throughout the war with the enemy, he was certainly a member of the oligarchic party, and a friend neither of the Athenian people, the demos, who had exiled him.?[8] This quote evidently represents the core of his debate and demonstrates that Thucydides is clearly very critical of democracy at this point. It is also vital to include the input of Thomas Hobbes, Thucydides? first English translator, who wrote that reading Thucydides? proved to him that ?democracy was wrong and one man was far wiser than throng.? Finally, according to Grote, Thucydides was ?not friendly to the democracy? and an ?observer rather less than impartial.?[9] One can observe then that Thucydides is very critical of democracy, commenting on the problems of Athens in its rashness in seeking an empire, walls, and so on against many of her own values; the hypocrisy of her people, championing freedom while wantonly enslaving others and her terrible moral decline owing to the demagogues and power of the base masses.[10] Thucydides emphasises the problem of Athenian democracy on the fact that in order for it to work, it has to rely on informed and engaged citizenry. It clearly leaves a lot to the people for it to work and this could be a definitive problem. ...read more.

Within the Republic, Plato holds that the people within this visualisation of utopian state must commit to the profession in which they have the natural talent in. For Plato this refers to a society which is just, efficient in the way that it operates and also one that is unified in terms of the relationship between social classes. This for Plato does cannot be achieved in democracy. Athenian democracy represents itself as a society which strictly obeys to the wants, the desires and the needs of the people. Hermes within his essay introduces the term ?appetite? by translator Desmond Lee to describe these wants of food, sex and money, above the more civilly beneficial elements of the psyche: reason and indignation.[18] Furthermore, Plato emphasises the importance of the value of happiness and eudemonia over the concepts of justice and liberty. Regardless of what has been said by both Thucydides and Plato, it is important to remember the brilliance of Athenian despite its criticisms. One can observe from this essay then that Thucydides provides an argument for both the positive and negative aspects of democracy. Thus, he is not wholly critical of democracy; to an extent, Thucydides is somewhat supportive of Athenian democracy, despite what has been said. In many respects, the Platonic texts which have been studied in depth are far more critical and blunt in that sense. Therefore, in my opinion, Thucydides critique of democratic knowledge is less significant than the views of Plato within the Republic. ...read more.