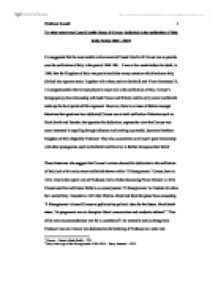 To What Extent was Cavour dedicated to the unification of Italy

To what extent was Count Camillo Benso di Cavour dedicated to the unification of Italy in the Period 1848 - 1961? It is suggested that the most notable achievement of Count Camille di Cavour was to preside over the unification of Italy in the period 1848-1861. It was a few weeks before his death, in 1860, that the Kingdom of Italy was proclaimed after many centuries which had seen Italy divided into separate states. Together with others, such as Garibaldi and Victor Emmanuel II, it is unquestionable that Cavour played a major role in the unification of Italy. Cavour's foreign policy (his relationship with both France and Britain) and his early career and beliefs make up the focal points of this argument. However, there is an issue of debate amongst historians that questions how dedicated Cavour was to total unification. Historians such as Mack Smith and Hearder, that question his dedication, express the view that Cavour was more interested in expelling foreign influence and creating a powerful, dominant Northern Kingdom of Italy shaped by Piedmont. They also concentrate on Cavour's poor relationship with other protagonists, such as Garibaldi and Mazzini, to further champion their belief. Those historians who suggest that Cavour's actions showed his dedication to the unification of Italy look at his early career and beliefs shown within 'Il Risorgimento'. Cavour, born in 1810, lived in the capital city of Piedmont, Turin. Before becoming Prime Minister in 1852, Cavour used his and Cesare Balbo's co-owned journal 'Il Risorgimento' to illustrate his ideas for a united Italy. Founded in 1847 after Charles Albert had freed the press from censorship, 'Il Risorgimento' allowed Cavour to publicise his political ideas for the future. Mack Smith states, "its programme was to champion liberal conservatism and moderate reforms1". ...read more.

Thus, Cavour's hatred of Mazzinian views shows his lack of dedication to unification. Mack Smith states, "Cavour used to tell people that Mazzini ought to be arrested and executed without pity12". As a result, Cavour was willing to side with Austria in order to see that a number of Mazzinians were imprisoned. This can therefore be used to suggest that Cavour was willing to go to any extent in order to stop Mazzini and his followers, which subsequently implies that he was uncommitted to unification. Furthermore, Mack Smith states, "the Mazzinians said that they wanted national unity far more than they wanted a republic13", showing that they were willing to compromise. "Cavour on the contrary said that he would refuse an alliance with them even if it meant Italy remained divided14", which displays his stubbornness. Hence, it can be argued that Cavour was not dedicated to the unification of Italy. Overall, Dennis Mack Smith appears to give a balanced argument. He both emphasises Cavour's dedication to the unification of Italy and considers evidence that suggests otherwise. However, Mack Smith's support should be considered with a critical approach, as he has written a number of books on Cavour's life including his biography. It is not surprising that other historians such as Collier regard Mack Smith's judgements as "generous15". They argue that Mack Smith, especially within his biography, places emphasis on Cavour's positive role in unification rather than his failings. Therefore, whilst references towards Mack Smith's viewpoints should not be ignored, it can be argued that there may be elements of bias within them, discrediting them as a basis for the overall line of reasoning. Historians, also often use Cavour's poor relationship with Garibaldi as evidence to support the idea that Cavour was not dedicated to the unification of Italy. ...read more.

He demonstrated the fact that "traditional autonomist feelings and inter-communal rivalries were still strong33". He had travelled only as far South as Tuscany and had no intentions of going any lower. Cavour's desire to create a Northern Kingdom of Italy can be seen in his reaction to Garibaldi's expedition to the South. The expedition had taken place despite Cavour's clear objection to the idea. "Cavour therefore did all he could, to prevent Garibaldi from setting out for Sicily34". Thus, Cavour's rebellious approach to Garibaldi's mission demonstrates his wish to reject the Southern states. Hence, the preceding evidence displays Cavour's belief that unification with the South would be futile and that only a conglomerate of the Northern states would flourish. In conclusion, it is clear to see that historians collectively seem to be confused with what Cavour desired first and foremost; the furthering of Piedmont as a state, the creation of a Northern Kingdom of Italy, or total unification. There are arguments suggesting that he was and was not dedicated to unification. Many believe that through his wish to create an Italy free from foreign influence, displayed within his journal 'Il Risorgimento', and his close relationship with France and Britain, Cavour revealed his desire for a united Italian Kingdom. However, the strongest argument remains; Cavour's poor relationship with Italian nationalists and his willingness to overlook the South in order to create a Northern Kingdom demonstrate Cavour's lack of dedication to the creation of Italy. He appeared only to shine to the idea of total unification once Garibaldi had succeeded in his expedition to the South and when public opinion seemed to be one of excitement towards the unification of Italy. From the quality of evidence and the general acceptance that Cavour was uncommitted to the creation of Italy we can conclude that Cavour was in fact not dedicated to total unification throughout the period 1848-61. ...read more.