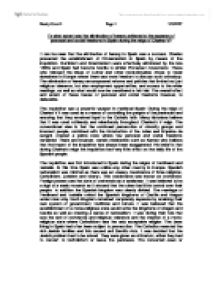 To what extent was the elimination of heresy achieved at the expense of personal and social freedoms in Spain during the reign of Charles V?

To what extent was the elimination of heresy achieved at the expense of personal and social freedoms in Spain during the reign of Charles V? It can be seen that the elimination of heresy in Spain was a success. Charles prevented the establishment of Protestantism in Spain by means of the inquisition. Illuminism and Erasmianism were effectively eliminated by the late 1520s and Spain had become hostile to similar Protestant movements. Those who followed the ideas of Luther and other revolutionaries chose to travel elsewhere in Europe where there was more freedom to discuss such orthodoxy. The elimination of heresy encompassed reforms and policies that limited not just religious tolerance, but also employment opportunities, and access to the wider readings, as well as what would now be considered a fair trial. The overall effect and extent of these losses of personal and social freedoms however, is debatable. The Inquisition was a powerful weapon in medieval Spain: During the reign of Charles V it was used as a means of controlling the people of the peninsula and ensuring that they remained loyal to the Catholic faith. Many historians believe that it was used ruthlessly and relentlessly throughout Charles's V reign. The conventional view is that the continued persecution of minority groups and innocent people, combined with the introduction of the Index and limpeiza de sangr�, created a police state where few personal and social freedoms remained. There are however, certain revisionists such as Kamen who believe that the impact of the inquisition has always been exaggerated. His belief is that during Charles's reign the inquisition had very little effect on the daily life of the Spanish people. The Inquisition was first introduced in Spain during the reigns of Ferdinand and Isabella. At this time Spain was unlike any other country in Europe. Spanish nationalism was minimal as there was an uneasy coexistence of three religions, Catholicism, Judaism and Islam(1). ...read more.

The index was clearly aimed to reduce personal freedoms of choice and expression; and yet the extent to which it affected people through Charles's reign is debatable. Firstly, many books on the Index were not accessible to Spanish people as most had never been available or published in the Peninsula. Secondly, there was such opposition to the index that booksellers continued to sell banned books as they believed that the criteria that determined a heretical book were faulty(7). The Index was introduced in the latter half of Charles's reign and the process of establishment was slow. It took many years for an index to be placed in every bookshop across the country and even then it was difficult to enforce. In Barcelona, banned books continued to be on sale years after appearing on the index(8). It is evident therefore, that the Index was not properly enforced until Philip's reign and that the effect on the Spanish people during the reign of Charles was minimal. People still enjoyed freedoms concerning choice of literature and freedom of expression. Another popular view is that the Index had a devastating effect on education during Charles's reign. Restrictions were imposed on theological and devotional studies(9) and book supplies were supposedly limited. Despite such claims it is evident that scholars suffered little at the hands of the inquisition between the years of 1516 to 1556. They were free to travel to any foreign university and it was only difficulties of distance, money and language that prevented Spaniards from crossing frontiers to other foreign universities. In addition it must be remembered that only the wealthy went to university. Thus the potential exposure to alternative orthodoxies or dogma was limited to only a small tranche of Spanish society. Ferdinand and Isabella had managed to gain significant control over the Spanish Catholic Church and they ensured that the standard of education for priests was high; so as to guarantee piety and gratitude amongst the Spanish clergy. ...read more.