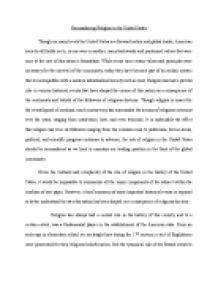 United States History. Religion has always had a central role in the history of this country and to a certain extent, was a fundamental player in the establishment of the American state.

﻿Reconsidering Religion in the United States Though on many levels the United States is a forward nation and global leader, American society still holds on to, in one way or another, many backwards and puritanical values that were once at the core of this nation?s foundation. While at one time certain values and principles were necessary for the survival of the community, today they have become part of an archaic system that is incompatible with a modern industrialized society such as ours. Religion has had a pivotal role in various historical events that have shaped the course of this nation as a consequence of the sentiments and beliefs of the followers of religious doctrine. Though religion is meant for the overall good of mankind, much controversy has surrounded the actions of religious extremist over the years, ranging from intolerance, hate, and even terrorism. It is undeniable the effect that religion has over its followers ranging from the common man to politicians, but as social, political, and scientific progress continues to advance, the role of religion in the United States should be reconsidered as we look to maintain our leading position in the front of the global community. Given the vastness and complexity of the role of religion in the history of the United States, it would be impossible to summarize all the major components of the subject within the confines of one paper. However, a brief summary of some important historical events is required to better understand the way this nation has been shaped as a consequence of religious doctrine. Religion has always had a central role in the history of this country and to a certain extent, was a fundamental player in the establishment of the American state. From an early age in elementary school we are taught how during the 17th century, a sect of Englishmen were persecuted for their religious beliefs and so, fled the tyrannical rule of the British crown to establish a society where they could practice in peace. ...read more.

Though the United States prides itself on diversity and tolerance, we are behind other countries such as Argentina and Iceland who have taken more liberal and progressive stances on the issue, granting the same rights heterosexual partners enjoy to homosexuals. The Icelandic people have even gone as far as appointing the world?s first openly gay prime minister to office. While the prospects for a change in stance by Washington seem slim, various state legislatures such as that of Massachusetts and New Jersey have already legalized gay marriage showing that a path of hope and equality for h********l partners exists regardless of religious bias. After a brief examination of the role of religion in shaping American politics and as a consequence various events in American history, it is necessary to understand the influence faith has over its followers, more importantly on families. Religious institutions have been particularly influential carriers of family-related culture over the course of American history. As families are the basic units of society, the tremendous effect that religion has had over society stems justly from the impact that it has over individuals and their loved ones. Our parents, siblings, and relatives exert great influence over us, especially during the first years of our lives, where much of what we learn comes from their teachings and experiences. Religion not only acts as moral path to guide us, but as link between us our kin and society, providing a source of informal networks that provide social support for family-oriented behavior. As parents raise their children, they will often times instill in them their own personal beliefs. At a young age children are highly susceptible to influence, causing in them a sense of obligation and pressure to please their parents by following in their faith. Though children lack the maturity and understanding to be able to make an educated decision with regards to what spiritual path is right for them, they should not be obligated to adhere to their parents? faiths. ...read more.

This individualized system of morality will be dependent on a well informed, educated society. This means that schools will have to teach all of its courses strictly objectively without any biased towards or against a particular subject. Secondly, this would mean that there would have to be a change in the media as a whole. Today, the media is a very biased institution that changes the opinions of millions depending on how they want to portray a particular event. In this future, the media would have to be free of biased reporting and like the schools report events objectively. In this way, citizens are presented the facts of an event and are left to themselves to infer what they will. This allows the citizens to develop their own code of morality or apply it as they see fit. However, a few problems remain in this individualized society. The first question that should be addressed is, how can anything large scale be done if all individuals are pursuing independent projects. The answer to this is quite a simple idea, society will still allow for group projects or processes to be done. People can still work for others and for the most part society can run similar to the way it does now with the exception that there is not one socially taught code of morality, rather the individual develops one that he or she can use. As one can see religion has had a vast effect both politically and historically on the United States and the world. It has had its positive effects along with some negative aspects. However, for the United States to successfully move forward into the future religion must change from its modern institutionalized meaning into something taken and changed by the individual. As we consider the possibilities of the future, the individual should be the one that creates his own set of values and moral codes. This introversion of the concept of religion will allow people to formulate their own answers to life while eliminating the conflicts that arise from religious tension. ...read more.