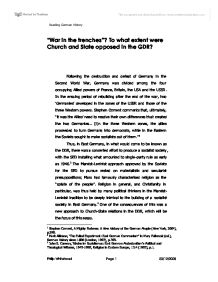 &quot;War in the trenches&quot;? To what extent were Church and State opposed in the GDR?

"War in the trenches"? To what extent were Church and State opposed in the GDR? Following the destruction and defeat of Germany in the Second World War, Germany was divided among the four occupying Allied powers of France, Britain, the USA and the USSR. In the ensuing period of rebuilding after the end of the war, two 'Germanies' developed in the zones of the USSR and those of the three Western powers. Stephen Ozment comments that, ultimately, "it was the Allies' need to resolve their own differences that created the two Germanies... [i]n the three Western zones, the allies proceeded to turn Germans into democrats, while in the Eastern the Soviets sought to make socialists out of them."1 Thus, in East Germany, in what would come to be known as the DDR, there was a concerted effort to produce a socialist society, with the SED installing what amounted to single-party rule as early as 1946.2 The Marxist-Leninist approach approved by the Soviets for the SED to pursue rested on materialistic and secularist presuppositions; Marx had famously characterised religion as the "opiate of the people". Religion in general, and Christianity in particular, was thus held by many political thinkers in the Marxist-Leninist tradition to be deeply inimical to the building of a socialist society in East Germany.3 One of the consequences of this was a new approach to Church-State relations in the DDR, which will be the focus of this essay. ...read more.

such as "There is no room for God in the universe".11 Religious education in schools was also "effectively banned"12 and a "wissenschaftlichen atheistischen Weltanschaaung"13 promoted in schools and colleges. Until 1969, then, the church maintained that its young people should not participate in the Jugendweihe, and refused confirmation to those that did.14 This probably contributed to feelings on increasing polarization between Christianity and socialism felt by some in the church during the 1950's and 60's. The SED, too, was drawn to take action against the churches of the EKD in the DDR after the all-German body voted to provide military chaplains to the West German forces in 1957.15 There was pressure from the SED for the churches in the DDR to disassociate themselves from the so-called 'NATO church' of the EKD, from whom much of their funding derived. In view of the political tensions of the Cold War, this seems understandable, and led to an increasing hostility in the stand-off between the church and the state.16 The metaphor of "trench warfare" seems appropriate here, as the SED were unable to force a disassociation with the EKD, and refused the church's offer to make parity by providing pastors to the East German military.17 Increasing polarisation was not the only option, however. Many church leaders recognized the danger of reacting to the SED's treatment of the churches in a way that constituted "inner emigration"18 and so distanced themselves from the outright denunciation of everything socialist that characterized some Western theologies of politics at the time. ...read more.

As late as 1983 a Stasi official could still maintain "[r]eligion is and remains a type of bourgeois ideology and is incompatible with Marxism-Leninism. At this particular time such an assessment cannot be the subject of public discussion but it must always determine the political ... conception",25 clearly demonstrating an ideological opposition that remained unameliorated by the change in the approach of the Church to play a role within socialism. The Stasi also engaged in "extensive infiltration" of the churches, recruiting informers and 'unofficial collaborators' (Inoffizieller Mitarbeiter) to provide information on church affairs, or even 'guide' synod decisions.26 Likewise, the churches retained their doctrinal distinctiveness and their representation of "an alternative Weltanschauung" and "countervalues",27 although their congregations were severely reduced by the secularization of the DDR.28 In conclusion, I would agree with Althausen's depiction of the relationship between Church and State in the DDR as "war in the trenches". Neither side could reach an authentic compromise with the other on ideological grounds, but for political and pragmatic reasons neither could they maintain complete separation. The church could not go into "internal exile" without renouncing a key part of its mission to witness to society; neither could the SED eliminate a deeply-rooted institution so quickly, or do without the welfare services provided by the Church. Communism and Christianity made for uneasy bedfellows in the DDR, but the example is an instructive one for political theology, even if the SED state has now collapsed and the East German church is now decidedly a minority group. ...read more.