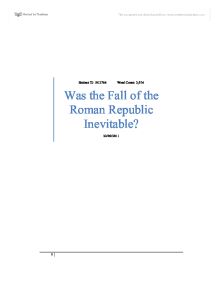 Was the Fall of the Roman Republic inevitable?

Student ID 1012764 Word Count: 2,554 Was the Fall of the Roman Republic Inevitable? 22/02/2011 The Roman Republic enjoyed reasonable success in its early stages, the conquest of Italy and overseas territories lead to rapid expansion and a surge in population, wealth and culture. However, as this essay will demonstrate this growth of population and increase of wealth was not sustainable; the allies with which Rome went to battle were not fairly rewarded and demanded citizenship, powerful men grasped at the chance to win power in Rome creating political conflict and foreign powers jealous of Rome's success would conspire to her downfall. In order to assess whether the downfall of the Roman republic by the turn of the century was inevitable, this essay will look at each major personality and decide whether the republic would have fallen in their absence or whether we can discern a clear point of no return in the politics of the republic. In order to do this and despite the lack of sufficient contemporary sources, this essay shall utilise the findings and musings of modern academic debate to answer its question. Ultimately, we shall conclude that the lion's share of problems in the republic were due to its unprecedented growth, system of government and mass of opportunity for ambitious political figures rendering the decline therefore unavoidable. This paper will start with the detailing the beginning of the end for the republic, which commences with the character of Tiberius Gracchus in 1341 and the efforts of his brother Gaius. ...read more.

However, one of Marius's key supporters stepped out of line and gave the senate justification to declare a state of emergency leading to the senate recalling Marius from the field in order to quell a revolt lead by his own supporters. After this, with very little favour left in Rome, Marius withdrew from political life. Marius served for an extraordinary six consulships during the prime of his political career, he was able to ascend to this position through no traditional (Shotter, 1994) means but through sheer popularity and military success, these values were the antithesis of what the senate wanted and strived for and the length of his term shows how the strength of the senate was waning and that its power was being replaced by single, monolithic powers in the form of political and military personalities. The culture of violence to handle unrest also aids in the decline of the republic as reason and justice give way to aggression and murder. This is not yet the point by which the revolution is inevitable, but Marius made great strides in showing that personal political power was not impossible. After the premiership of Marius and failed attempts by a tribune, Marcus Drusus, to extend franchise, the Italian allies realised that political manoeuvres were amounting to nothing at that something more drastic needed to be done in order to attain political rights. The 'Social War' that followed was to be a key point in the decline of the republic as it showed the senate losing its power over popular sentiment. ...read more.

However short this perpetual dictatorship lived, it was to create the opportunity for Augustus to seal the military rule that marked the final resting place of the Roman republic. The triumvirate was not the point of no return that this essay years to find, it was merely a consequence of half a century of political domination by men abusing popularity and wealth to achieve their own political goals. When asked the question as to the inevitability of the republic's failure, we must answer that yes, the failure was predetermined by the culture created in Rome, by the vast wealth and power available to opportunistic and ambitious men and also the vested interest within the senate to keep power to themselves. The lives of the mentioned men all contributed to the downfall of the political system and it is important that we conclude the analysis that the reasons for their actions were sometimes noble and sometimes selfish but the general sentiment was that of greed. The senate at many opportunities chose the wrong course of action in dealing with opposing legislation from the tribune. Instead of opposing it with aggression and stubbornness they could have avoided the decent into chaos and eventual despotism by acquiescing certain demands to the people and using the judicial system, not lynch mobs, to exact justice, but the culture created in Rome was that power came before stability and this is the reason the republic fell - it was destroyed by the same energy and power hungry attitude that made it successful in the first place. ...read more.