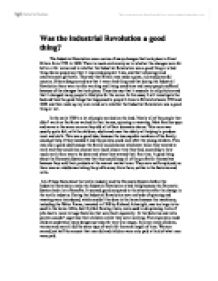 Was the industrial Revolution a good thing?

Was the industrial Revolution a good thing? The Industrial Revolution was a series of many changes that took place in Great Britain from 1750 to 1900. There is much controversy as to whether the changes were for better or for worse and to whether the Industrial Revolution was a good thing or a bad thing. Some people say that it improved peoples' lives, and that technology and entertainment got better. They say that Britain was made a great, rich and powerful country. Others disagree and say that it was a bad thing and that during the Industrial Revolution there were terrible working and living conditions and many people suffered because of the changes that took place. They also say that it caused a lot of pollution and that it changed many people's lifestyles for the worse. In this essay I will investigate the bad and then the good things that happened to people's lives in Britain between 1750 and 1900 and then make up my own mind as to whether the Industrial Revolution was a good thing or not. In the early 1700's a lot of people worked on the land. Nearly all of the people that didn't work on the farms worked in their homes, spinning or weaving. Most families spun and wove in the same room as they did all of their domestic chores. This room was usually quite full, with the children, adults and even the elderly all helping to produce wool and cloth. This was a good idea, because the less capable members of the family could get help if they needed it and the parents could look after the young children. This was also a good idea because the family could choose whichever hours they wanted to work and they could also choose how much leisure time they had, according to how much work there was to be done and when they wanted their free time. ...read more.

This was good, because before this many children had not been aware of the world outside of their local environment and were uneducated and unable to read or write. Another bad point about the Domestic System and the textile industry before the Industrial Revolution is that it couldn't produce a lot of wool with just one spinning wheel in each house; thousands of times more cotton (which replaced wool) could be spun on the great new machines in the large factories. The Spinning Jenny was invented. It could spin 16 spindles at once making spinning a lot more quickly. Another great new invention was the Power Loom, invented in 1785 by Edmund Cartwright. It speeded up weaving a lot. The hand loom weavers were then forced to give up their jobs and become factory weavers. A good thing about producing a lot more cloth was that it was guaranteed to sell and be exported abroad, so the workers received regular wages, unlike in the Domestic System. Before the Industrial Revolution they had to go to the nearest market town or pay a master clothier to sell it for them. Another good point about the mills, that was not so before the Industrial Revolution was that steam power was invented. New textile factories were built, this time not necessarily near to rivers. By 1880 all of the spinning and weaving processes had become fully mechanised . The machines took a lot less effort to power than when the Domestic System was in use. Before the Industrial Revolution hand power and sometimes water power were used in the textile industry. Another way in which steam power was used was to develop the transport system. In 1750 most people travelled by foot, heavy loads being transported by horse. In 1830 horses were used to pull boats along the newly made man-made rivers, canals. Between 1830 and 1900 transport developed hugely. ...read more.

Some of the public baths are still around today, although they have now changed into swimming pools. Lots of things that originated during the Industrial Revolution such as Bank Holidays, are still in use today. I would not have liked to live between 1750 and 1850, because the living and working conditions were very poor. I would've hated to work long hours in the mills or mines and then come home to a cellar shared with ten others with the foul smells of sewage and other waste in the air. I think that during the Industrial Revolution many important reforms took place, which improved the quality of life for most people and that by 1900 Britain would have been quite a nice place to live. The changes that took place could mean different things to different people, therefore people who are very concerned about pollution and environmental damage will say that it is a bad thing. The people who are interested in health care would say that the Industrial Revolution was a good thing because many new treatments and cures to diseases were invented. I would rather have lived in 1900 than in 1750, although people that prefer more friendly, rural communities would probably rather have lived in 1750. I think that the Industrial Revolution had more good points than bad points, because most of the problems that were around at the beginning of the Industrial Revolution ended up being solved by acts that were passed by Parliament. I think that most of the changes that happened about 200 years ago still influence our lives today. Overall the Industrial Revolution improved the bad living and working conditions, made Britain wealthier and far more powerful, improved entertainment, travel, education, public facilities and health care. Out of all of the points that I've mentioned in my essay I can only think of one bad effect that is long term and is still around. The problem has not yet been solved - that's pollution. ...read more.