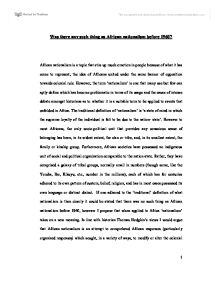 Was there any such thing as African nationalism before 1960?

Was there any such thing as African nationalism before 1960? African nationalism is a topic that stirs up much emotion in people because of what it has come to represent; the idea of Africans united under the same banner of opposition towards colonial rule. However, the term 'nationalism' is one that many use but few can aptly define which has become problematic in terms of its usage and the cause of intense debate amongst historians as to whether it is a suitable term to be applied to events that unfolded in Africa. The traditional definition of 'nationalism' is 'a state of mind in which the supreme loyalty of the individual is felt to be due to the nation- state'. However to most Africans, the only socio-political unit that provides any conscious sense of belonging has been, in its widest extent, the clan or tribe, and, in its smallest extent, the family or kinship group. Furthermore, African societies have possessed no indigenous unit of social and political organization comparable to the nation-state. Rather, they have comprised a galaxy of tribal groups, normally small in numbers (though some, like the Yoruba, Ibo, Kikuyu, etc., number in the millions), each of which has for centuries adhered to its own pattern of custom, belief, religion, and has in most cases possessed its own language or distinct dialect. ...read more.

This would have inevitably caused grievances and resentments on the part of Africans towards their colonial masters. This mutual feeling of anger and frustration was not just present amongst the general African population. The nationalist leaders of the 1930s, 1940s and 1950s were also the products of colonial and metropolitan schools. For example Julius K. Nyerere of Tanzania studied in Great Britain, Habib Bourguiba of Tunisia studied in Paris, Kwame Nkrumah of Ghana and Hastings K. Banda of Malawi studied abroad. These men were lawyers, doctors, journalists and intellectuals who were respected as national heroes and eventually spearheaded the nationalist movements in various African dependencies. These nationalist leaders were charismatic and drew many followers because they were able to tap into the general frustration and discontent of the masses as they had experienced discrimination themselves. These men had read the works of political and social philosophers from the Western world. They had learnt about the basic rights of man, democracy, freedom, justice, and the rights of self determination of peoples. However they soon realised that these noble concepts popularised in the Western world did not apply to them3. Arguably it was at this point that they became thoroughly aware of the theoretical glass ceiling that had been placed upon their heads; ...read more.

So what started out as the desire for a fair and equal education and the consequent opportunities that education provided turned into the realization that this was never going to be achieved under colonial rule. Ghanaian elites began to see themselves as pilots of the common people in Ghana. They were anti-colonial and anti-traditionalist and thereby African nationalists. From this base, they organized themselves behind the rallying cry of the discontented majority and pushed for Ghanaian independence from colonial control7. Considering that Ghana achieved its independence in 1957 under the leadership of nationalist Kwame Nkrumah it can certainty be suggested that African nationalism or at least early sentiments of it existed before 1960. Intellectual sentiments expressing the need for Africans to resist European domination were certainly present before 1960. Early pioneers of Pan Africanism such as Edward Wilmot Blyden (1832-1912), W.E.B. Du Bois, and Marcus Moziah Garvey served as catalysts to the rise of African nationalism. Edward Wilmot Blyden was the forefather of the twentieth century black consciousness movement known as negritude which, in effect, asserted distinctiveness of the African personality and the uniqueness of the African cultural heritage for black people wherever they might live. He criticized foreign missions for seeking to Europeanize Africans and urged the setting up of an independent nondenominational African church. ...read more.