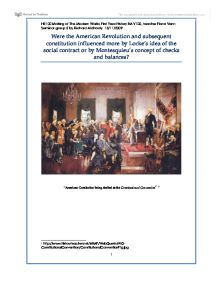 Were the American Revolution and subsequent constitution influenced more by Lockes idea of the social contract or by Montesquieus concept of checks and balances?

fourth President of America, was but one who instigated in the new Constitutions construction, besides many other great men of thoughts such as Benjamin Franklin, George Washington, etc a total of having thirty nine delegate signers present at the momentous event, this new constitution took inspiration from the original articles and was to stand as the summit for American politics based on the ideas of Montesquieu's "Separation of Powers23" which were about to be strengthened through further legislation, and agreement of its future ratification by the seven out of thirteen states. The Constitution also stood for Liberty in the right to the vote for men, property holders and tax payers, it would be another hundred years until this happened in Great Britain. Furthermore for Liberty unlike in France, this new constitution stated that the government could not issue titles of Nobility, thus sparing any proletariat anxiety for future social revolution. This new vision would see the U.S adopt the bicarmel legislative system, with two representative sides in government, displaying fair interest of both parties' interests; all states were to be represented, through the new House of Representatives in a fair proportion of each states population. The Constitution of the United States of America contained sections and points of completely new legislative, executive and administrational powers of organisation to maintain principles of the checks and balances e.g. section three point six "The Senate shall have the sole Power to try all Impeachments. When sitting for that Purpose, they shall be on Oath or Affirmation. When the President of the United States is tried, the Chief Justice shall preside: And no Person shall be convicted without the Concurrence of two thirds of the Members present24". These forms of statements were made in order to secure America as a truly democratic nation with the aiding theory of power separation, as one can see as to what John Locke gave earlier in the Revolution with the spark of liberty and "unalienable rights25" to Thomas Jefferson in the Declaration ...read more.

the checks like that of the United States of America, then perhaps such a man of clear psychological ill health would never have achieved the status of a president or a Fuehrer. Concluding the argument is with an ongoing debate regarding the Electoral College which came into force after the Constitutional Convention Sept 17 1787, put forward by chairman David Brearley, there were many deciding factors as to why the US Government chose to use this system, it appears to be a fair representation of Montesquieu's influence on Revolutionaries by the idea of selecting a President and a Vice President, through peer electoral assessment of said candidates, who consequently would need a fair geographic standing to hold their position, this college maintains the separation of power, and allows a fair vote to be cast by smaller states who fear they would be a forgotten voice if a popular vote was to take over by the larger states, the college also helps to keep out dangerous third parties who may be too radical for government e.g. the BNP the extremist fascist faction and their new position into the European Union is evidence of the need for an Electoral College, yet of course there are negatives to the college and that is the popular vote may be disregarded if the electoral vote is absent. However even if this is regarded as a negative outlook of checks and balances or power separation, one must think of all the institutions in which liberty has prevailed to this day, due to Montesquieu's theories to protect the people through separations of power, and John Locke's influence of Natural Rights of law, to every man and woman, thus not one of these men can be empowered, with the honour of being the sole musing inspiration to the American Revolution; surely both Montesquieu and John Locke have unmistakeably earned the right to be accredited, through the fundamental beliefs flowing from both men, these are both makers to which liberty is equally born. ...read more.