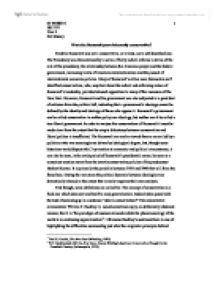 Were the Roosevelt Years Inherently Conservative?

Were the Roosevelt years inherently conservative? Franklin Roosevelt was not a conservative, or at least, not a self described one. His Presidency was characterised by a series of fairly radical reforms in terms of the role of the presidency, the relationship between the American people and the federal government, increasing levels of American internationalism and the pursuit of interventionist economic policies. Many of Roosevelt's critics were themselves self identified conservatives, who, sceptical about the radical and reforming nature of Roosevelt's leadership, provided staunch opposition to many of the measures of the New Deal. However; Roosevelt and his government was also subjected to a good deal of criticism from the political left, indicating that a government's ideology cannot be defined by the identity and ideology of those who oppose it. Roosevelt's government can be called conservative in neither policy nor ideology, but neither can it be called a true liberal government. In order to analyse the conservatism of Roosevelt it must be made clear from the outset that the simple dichotomy between conservative and liberal politics is insufficient. The Roosevelt era can be viewed then as an era led by a politician who was seemingly not driven by ideological dogma, but, though some historians would dispute this1, by reaction to economic and political circumstance, it can also be seen, in the early period of Roosevelt's presidential career, be seen as a conscious reaction away from the overtly conservative policies of his predecessor Herbert Hoover. ...read more.

It was popular too. 'In the election of 1936 Franklin Roosevelt achieved on of the centuries most smashing triumphs. Running against moderate Republican Alfred M. Landon of Kansas, he carried forty six of the forty eight states with just over 60% of the popular vote6.' Of course the initial relief and recovery stages of the New Deal were, by the late mid 1930's being supplanted by an increasingly reform focussed administration, and it was in this reform that Roosevelt began to run into opposition to and criticism of his policies. In earlier years of the New Deal, Roosevelt, though criticised by staunch conservatives, had been able to pass New Deal legislation with relative ease. By 1937, however, things had become more difficult and even members of his own party with conservative leanings were beginning to mount against him. For example Senator William Bailey, a Democratic senator for North Carolina and initial, albeit sceptical ally of Roosevelt during the early years of the New Deal, broke away from his party in order to form a bipartisan coalition of conservatives, together with the Republican Arthur Vandenberg, from which any further New Deal institutions could be opposed. For conservatives, the New Deal was a step too far in state regulation, and many felt that excessive New Deal legislation was akin to socialistic politics, something unthinkable even in Roosevelt's America. Roosevelt himself courted controversy through various incidents, most notably the 'court packing' incident of 1937 in which he was accused of attempting to manipulate the membership of the Supreme Court in order to enforce the retirement of conservative judges sceptical to his New Deal measures and replacing them with more willing figures. ...read more.

The new jobs created were invariably taken up by whites, and in many New Deal institutions such as the Tennessee Valley Authority, segregation was in force11. Despite this, the black electorate flocked to the New Deal and whether 'seduced by Roosevelt's rhetoric12', or simply responding out of desperation to the idea of hope, something which was certainly not offered by Roosevelt's conservative rivals, it is clear that the criticisms levelled at Roosevelt by his leftist critics cannot really be attributed to any 'conservatism' on the part of Roosevelt himself. The Roosevelt years then were inherently unconservative. They were a period of huge reform in both the role of the presidency and of federal government vastly expanded, and an age of economic and social intervention when previously there had been as little as possible. This was in part necessitated by circumstance; an unprecedented situation like the great depression called for an unprecedented solution. Whatever the criticisms levelled at Roosevelt, they cannot be attributed to any sense of conservatism in either his methods or aims. The problem is that the society in which he was enacting these radical schemes was, for all its pluralism, on the whole inherently conservative, particularly in areas such as the south. For a politician whose rhetoric spoke of delivering for everybody, that also included conservative thinkers and big business. The most profound effects of Roosevelt's policies on conservatism in America was then to usher in the redrawing of party political lines on a liberal/conservative basis; and to redefine the nature of the role of president to the extent that never again would a presidency along truly conservative lines be possible. ...read more.