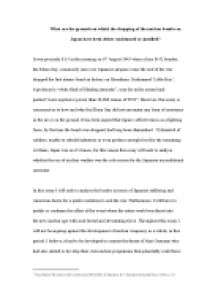 What are the grounds on which the dropping of the nuclear bombs on Japan have been either condemned or justified?

﻿What are the grounds on which the dropping of the nuclear bombs on Japan have been either condemned or justified? It was precisely 8.15 in the morning on 6th August 1945 when a lone B-52 bomber, the Elona Gay, commonly seen over Japanese airspace come the end of the war dropped the first atomic b**b in history on Hiroshima. Nicknamed ?Little Boy?, it produced a ?white flash of blinding intensity?, seen for miles around and packed ?more explosive power than 20,000 tonnes of TNT?. However, this essay is concerned as to how and why the Elona Gay did not encounter any form of resistance in the air or on the ground. It has been argued that Japan?s effectiveness as a fighting force, by the time the b**b was dropped, had long been diminished. [1] Exhausted of soldiers, unable to rebuild industries or even produce enough food for the remaining civilians, Japan was on it?s knees, for this reason this essay will seek to analyse whether the use of nuclear warfare was the sole reason for the Japanese unconditional surrender. In this essay I will seek to analyse the bombs in terms of Japanese suffering and American desire for a quick resolution to end the war. Furthermore, I will have to justify or condemn the effect of the event where the entire world was thrust into the new nuclear age with such brutal and devastating force. Throughout this essay I will not be arguing against the development of nuclear weaponry as a whole, in this period. ...read more.

Japan has to be considered at this time completely defenceless against such intense aerial bombardment, as the U.S forces were given free reign over Japan?s skies. Therefore, a strong argument that has been used to condemn the use of nuclear weaponry on Japan was to ask whether the bombs were even necessary as a form of pure military strategy. The Japanese Navy and air force was totally decimated by June 1945. With no air force to speak of to contest the dropping of the Nuclear b**b Hiroshima and Nagasaki were completely devoid of any ability to defend to itself. The Americans knew how damaging these air raids were to the Japanese war machine, but as Feis claims in ?The Atomic b**b and the End of the Second World War?, they were unwilling to await the gradual descent into helplessness, which would have lead to unconditional surrender. It was the impatience of the Americans for the war to be drawn to a swift and resounding conclusion, along with saving the lives of Her own servicemen, that resulted in the dropping of the b**b.[6] To dispute this condemnation of U.S?s apparent over eagerness to unleash its new atomic b**b, it can be seen that Stimson, then U.S Secretary of War, had planned for a Naval and Infantry assault on Japan involving 5,000,000 men. This, however, would have extended fighting well into the latter part of 1946, and would have ended in at least 1,000,000 casualties for the Allied forces due to the honour and fighting strategies of the Japanese soldiers and civilians who were considered to fight all invaders until death in the name of the emperor. ...read more.

Whether the critical view that the U.S had alternate reasons for dropping the b**b on Hiroshima other than to hasten the end of World War II, it remains difficult to establish whether or not the atomic b**b was the sole reason for Japanese surrender. The USSR joining the war at this time can be seen to offer a ?double-blow?, to the Japanese forces, which ultimately led to their unconditional surrender, on the US battleship ?Missouri?, on the 2nd of September 1945, thereby ending World War II. To conclude, I believe that I have adequately disproved the argument that the U.S forces were ?h**l-bent? on using their nuclear b**b, and unwilling to discuss alternatives. Furthermore, I believe that the key decision-makers and American Generals had by t his time become embittered to the horrors of war and though their decisions resulted in the loss of a further 200,000 civilian lives, it was not taken lightly. I do, however, agree that the total annihilation of the cities of Nagasaki and Hiroshima, could have been avoided if the US, had allowed more time for the USSR to effectively enter the war which would have reinforced their position of military superiority, and extinguished what little Japanese morale remained. Finally, it is important to note, however, that despite historians views, most moral judgements on the atomic bombings of Hiroshima and Nagasaki are purely in hindsight, something the key players in the decision making process simply didn?t have. Roosevelt in his last months in office, was concerned with what the post-war world would look like, because this weapon had the capacity to destroy all mankind. On these ?gravest of decisions neither history nor past experience, can give reliable guidance. ...read more.