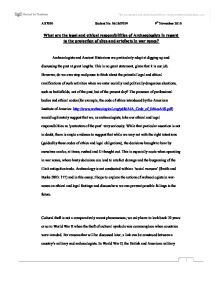 What are the legal and ethical responsibilities of Archaeologists in regard to the protection of sites and artefacts in war zones?

What are the legal and ethical responsibilities of Archaeologists in regard to the protection of sites and artefacts in war zones? Archaeologists and Ancient Historians are particularly adept at digging up and discussing the past at great lengths. This is no great statement, given that it is our job. However, do we ever stop and pause to think about the potential legal and ethical ramifications of such activities when we enter socially and politically dangerous situations, such as battlefields, not of the past, but of the present day? The presence of professional bodies and ethical codes (for example, the code of ethics introduced by the American Institute of America: http://www.archaeological.org/pdfs/AIA_Code_of_EthicsA5S.pdf) would legitimately suggest that we, as archaeologists, take our ethical and legal responsibilities as 'protectors of the past' very seriously. While that particular assertion is not in doubt, there is ample evidence to suggest that while we may act with the right intentions (guided by these codes of ethics and legal obligations), the decisions brought to bear by ourselves can be, at times, rushed and ill-thought out. This is especially acute when operating in war zones, where hasty decisions can lead to artefact damage and the burgeoning of the illicit antiquities trade. Archaeology is not conducted within a 'social vacuum' (Smith and Burke 2003: 177) and in this essay, I hope to explore the actions of archaeologists in war-zones on ethical and legal footings and discuss how we can prevent possible failings in the future. Cultural theft is not a comparatively recent phenomenon; we only have to look back 70 years or so to World War II when the theft of cultural symbols was commonplace when countries were invaded. For reasons that will be discussed later, a link can be construed between a country's military and archaeologists. In World War II, the British and American military began to see the benefit in employing archaeologists in consultant roles in order to protect places of cultural heritage within the theatre of war (Meyer 1996: 142). ...read more.

and to provide the same cultural aid as our troops have been giving military aid to the Iraqi government. While the situation has probably improved with the toppling of the Taliban, it is still drastically unstable (Thomas 2004). While lobbying UNESCO for more site protection from looters would be beneficial in the short term, ethically, the right thing to do is to do what Thomas and his team have done and try to convince locals that they can gain money from helping with archaeology, not plundering it (Thomas 2004). The responsibility falls upon the 'West' to fund projects and development, given that we are the highest consumers of illegal goods (Thomas 2004). Iraq has been a hot-spot for cultural material theft since the outbreak of the Gulf War (1991). Before 1991, Iraq had been fairly safe for cultural materials, possibly because of the legacy that the British colonial state had left Iraq with, ensuring legal protection of antiquities. However, with economic sanction crippling Iraq's economy (Gibson 1997; Russell 1997), more and more impoverished people started to resort to looting in order to make ends meet. The Gulf War merely exacerbated this situation, as archaeological sites were left unguarded and unmanned; one such casualty being the Sennacherib Palace at Nineveh which suffered substantial looting (Renfrew 2000:57). Archaeologists at the time were concerned with the proximity of protected sites in relation to targets that the coalition command had marked for bombing. They had not been consulted by the Department of Defence about this (Fleming 1996: 128)! Not surprisingly, despite the advanced nature of warfare, there was damage to archaeological sites. The ziggurat at Ur displayed b**b craters, while a strafing run by an A-10 put 400 holes in the side of a Ziggurat (Gibson 1997). Not surprisingly, alerting the world's media to the goings on saw an improvement in affairs, with making antiquity buyers more cautious, thanks to articles in Archaeology magazine and The New York Times (Gibson 1997). ...read more.

Said items have to be given a source before they can be sold as well and this too is open to manipulation from archaeological scholars (Bogdanos 2005: 520). Sometimes the ethical and legal abuse is a lot more flagrant. In 1982, a British archaeologist was arrested for smuggling antiquities out of Afghanistan (Greenfield 1989: 208). Looting will be exacerbated so long as it is aided by un-ethical practices from archaeologists (Gibson 1997). 'Who has the right to control the past?' is a very common question in archaeological circles (Smith and Burke 2003: 177). Though we follow a set of ethics to make sure that we protect the past, we have to be careful how we apply those in socially aggravated areas, such as battle-zones. We have discussed many different scenarios throughout history to find out archaeological responsibilities in war zones. In World War II, 'monuments officers' lobbied Generals and protested against U.S. administration decisions to protect cultural material and return the materials to their original places. In Israel of 1993, we see how a difference in ethical and legal responsibilities on behalf of Israeli archaeologists created ill feeling among a people who they were just about to end a war with. In areas in Afghanistan, following legal responsibilities is not enough - it is our ethical duty to help protect a country's heritage which we in the west have helped to spoil through our consuming of stolen antiquities. Similarly in Iraq, it might have been our legal responsibility to protect culturally and archaeologically important sites from bombing (Newcastle University 2008), but in doing so, we have compromised our ethical responsibilities towards our fellow man by giving the green light to bloodshed so long as antiquities are not harmed. Should we even be working in a war zone in the first place (Hardesty 2003: 210)? For the most part, our legal and ethical responsibilities are mostly the same, but in cases where following our legal obligations leads to people dying, then it is our ethical duty to make a speak out. ...read more.