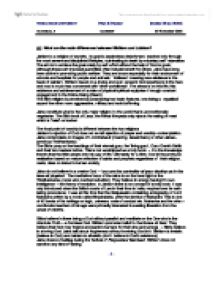 What are the main differences between Sikhism and Jainism?

TUTORIAL 5 'JAINISM' 19 November 2003 A1: What are the main differences between Sikhism and Jainism? Jainism is a religion of severity. Its goal is passionless detachment, reached only through the most severe and disciplined lifestyles, culminating in death by voluntary self-starvation. The aim is to achieve the goal solely by self-effort without the help of God or gods; Although these self-imposed austerities often include benefit for others. Jains have long been active in promoting public welfare. They are known especially for their endowment of schools and hospitals for people and animals. 'Ahimsa' meaning non-violence is the basis of Jainism. Sikhism based on a loving and ever-present God experience in the here and now is much less concerned with 'other worldliness'. The stress is on this life, this existence and achievement of a state of physical/spiritual equipoise through constant engagement in the Divine Being (Naam). The Sikh religion is perceived as possessing two basic features, one being a mystical aspect the other more aggressive, military and world affirming. Jains constitute what is the only major religion in the world that is unconditionally vegetarian. The Sikh book of Laws, the Rehat Meryada only rejects the eating of meat which is 'halal'-or kosher. The focal point of worship is different between the two religions. Jainism's rejection of God does not entail rejection of prayer and worship-contemplation. Jains contemplate on images of Lord Mahavir (meaning Great Hero) or other Jainas- (previous Tirathankaras). The Sikhs pray on the teachings of their eternal guru, the 'living guru', Guru Granth Sahib and their ten masters before. This is not worshipped as a holy book - It is the knowledge therein that the Sikh adopts into his way of life. Ultimately for a Sikh, God id the profound realisation based on mature reflection of saints and prophets regardless of their religion, caste, class or status in human society. Jains do not believe in a creator God - 'you are the controller of your destiny as in the laws of physics'. ...read more.

The other vows i.e. truthfulness, non-stealing etc, safeguard it. Violence in Jainism is defined as the severance of vitalities out of passion. The vitalities or life elements are 10 in number : Five senses, speech, mind, respiration, age and energy. Violence is condemned since it causes pain and suffering to living beings. The individual's primary duty is the perfection of his soul and that of his fellow creatures. They believe in the three ideals of * Samyagdarshana (right belief) * Samyagjnana (right knowledge) * Samyakcarita (right conduct) It is desire or negligence that is the real cause of sin - He who acts with proper care does not commit the sin of violence by mere injury - violence is forbidden because it horrifies all creatures. Killing is condemned since every creature wishes to live and not be slain. The positive aspect of non-violence is compassion - daya - the beneficent mother of all living beings. For the sake of strengthening the vows, there are some rules to be observed by the ascetic (those who take the vows strictly and severely) For the vow of non-violence he has to observe the following rules: control of speech, control of thought, regulation of movement, care in taking and placing things and examining food and drink. By the observance of these and similar other rules the vows of non-violence gains sufficient strength. To speak of that which is not commendable is falsehood. That which causes pain and suffering to living things is not commendable, whether it refers to actual facts or not. Hence the vow of non-falsehood includes the abstention from untruth spoken out of passion, and from truth too if it provokes violence, This vow enjoins the avoidance of harmful, harsh, secret, cruel or inaccurate speech and the use of balanced language that gives satisfaction to all creatures. The following observances strengthen the vow of truthfulness: giving up anger, greed, cowardice, and jest and speaking blameless words. ...read more.

The cosmology and related subject matters, which are discussed in the scriptures, reflect the common knowledge base existed about universe at that time. Jainism is divided into two sects or branches, which follow off from the main beliefs. These two divisions are known as the Digambars (sky clad pr naked), and the Svetambars (white robed). The Digambars are austere (strict) and believe that one should possess nothing, not even clothes. They also believe that salvation is not possible for women, which is an extreme belief of this division. Their final division may have been due to a dispute over the authority of religious texts and scriptures. A5: Explain reasons why very few numbers of people profess the Jain faith. For a religion of only 3 million people, almost all of whom live in India, Jainism has wielded an influence out of all proportion to its size and distribution. This influence of its eminently practical philosophy has been felt keenly in the modern world through Mahatma Gandhi. One of the reasons that Jainism has largely been confined to India could be that the ascetics in keeping with the principle of Ahimsa-non-violence did not use any mechanical means of transport. There is restriction in travelling. As Jainism is a religion of austerities pragmatically it may be difficult to adopt i.e. It may also be that the younger generations felt the doctrines to be out of mode. The monks walk looking at the ground all the time, they cannot cook and beg from different households only a small portion of food so that the householders do not suffer. Some do not wear any clothes according to the vows of non-possessiveness. This issue of nudity may have been the pre-eminent source of disunity among Jains. The householders of the Jain faith are careful about keeping away from adultery, prostitution as s*x-passion is considered to be himsa and this may have contributed to population control. Without moral observances spiritual progress is inconceivable. WORLD SIKH UNIVERSITY Priya K Panesar Student ID no: 03/162 - 1 - ...read more.