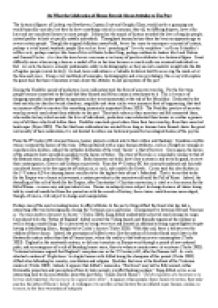 What does the celebration of heroes reveal about attitudes to the past?

﻿On What the Celebration of Heroes Reveals About Attitudes to The Past The historical figures of Ludwig van Beethoven, Captain Scott and Genghis Khan, would not be a grouping one would typically consider, but they do have something critical in common, they all, to differing degrees, have a fan base and are considered heroes to some people. Seldom has the annals of history recorded the lives of regular people, instead prefers to look at specific notable individuals. Throughout human history there has been an apparent urge to revere certain people. Though the original definition meant bold, heroic has come to encompass a myriad of criteria; perhaps a set of moral standards people like such as Jesus? preaching of ?love thy neighbour? or Oscar Schindler?s selfless acts, perhaps martyrs like Joan of Arc or Martin Luther King, perhaps militaristic leaders like Lord Nelson and General Custer - it is clear the term heroic can mean a vast array of positive attributes to a historical figure. Great difficulty arises when using a hero as a model of his or her time because as much myth can surround individuals as fact. As such, the hero is a deeply problematic entity in historiography, as they are not a realistic insight into the life of regular people (social history). Instead, hero celebration is a valuable historical tool for assessing the mind-set at the time and since. Using a vast multitude of examples, historiography and even psychology, this essay will explore the great deal that hero veneration reveals about the attitudes to and perceptions of the past. ...read more.

Custer played a part of the consolidation of the United States. People do not relate as much to Crazy Horse as he fought for a cause, though probably no less noble, at odds with American manifest destiny ideals (Ambrose 1996). The same can be applied to national heroes. It goes without saying that Lord Admiral Nelson would be more revered in Great Britain than France. British historiography records that he was a great leader and seaman who died for Crown and Country. French historiography records that the Battle of Trafalgar was an inconclusive battle in which a British admiral (Nelson) was killed by a French marksman. This is an interesting attitude to the past, indeed, the figures that people consider heroes are subject to many constraints and external factors, no less their nationality and on which side they fought. When one considers the atrocities of Hitler and Stalin, it is a startling fact that these two have an active fan base, not only to political extremists, but viable historians. It is often said in historiography that the past does not exist, perhaps that is why there can be an apparent humanitarian and emotional detachment from abhorrent acts in history. Perhaps because these atrocities were committed in the past, they feel less ?real? than if one were to see Stalin?s purges today on BBC News. Some historians argue that Stalin made mistakes but we should look past his terrible acts to see the transformation he instigated - to change Russia from a backward feudal system to a superpower that would rival the USA in less than forty years. ...read more.

Instead, the place of heroes is to show us the mind-set and perception of the hero in his time and since. What hero celebration does is gives us deep insight into the perceptions of the time and since. In addition to the insight it gives us, the celebration of heroes is a beneficial tool in many other respects such as the revering of nationalistic founders and patron saints aid to a national identity and the sense unity. It is a peculiar fact, but undoubtedly true, that the act of hero celebration tells us more about ourselves than the hero in question. Ambrose, S. E. Crazy Horse and Custer: The Parallel Lives of Two American Warriors (1996). University of New York, New York Carlyle, T (1840) Lectures on Heroes ? Lecture 1[Lecture transcript] Cubitt, G. Heroic Reputations and Exemplary Lives (2003). Manchester University Press, Manchester Houghton, W. E. The Victorian frame of mind, 1830?1870 (1957), Ch. 12 (Hero-worship). MacDonald, I. The New Shostakovich (2006). Plimco Publishing, London MacMillan, M. The Uses and Abuses of History (2009) Profile Books Ltd. Suffolk Man, J. Genghis Khan - Life, Death and Resurrection (2005). Bantam Press, London Pryor, F. Britain BC: Life in Britain and Ireland before the Romans (2003). Harper Perennial, London Yorke, B. Alfred the Great: The Most Perfect Man in History? History Today Magazine Available at www.historytoday.com/barbara-yorke/alfred-great-most-perfect-man-history. Accessed 1/5/12. Yorke, B. ?Alfredism: the use and abuse of King Alfred?s reputation in later centuries?, in T. Reuter (ed.), Alfred the Great: papers from the eleventh-centenary conferences (Aldershot, 2003), chap. 21 (on King Alfred, d. 899). ...read more.