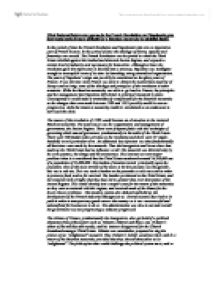 In the period of time the French Revolution and Napoleonic rule are an imperative part of French history. In this period of time the ideology of liberty, equality and fraternity was crucial. The French Revolution was the period in which the Third Estate rebelled against the loathed and detested Ancien Regime, and expands a certain level of authority and supremacy for themselves. Although at times the revolution gave the impression to descend into a travesty, Napoleon was intelligent enough to accomplish some of its aims by launching strong centralised organization. The years of Napoleon’s reign can possibly be considered as the glory years of France. It was the time when France was able to dictate the mainstream majority of Europe and to bring some of the ideology and principles of the revolution to other countries. While the Bourbon monarchy was able to go back to France, the principles and the management that Napoleon left behind in principal remained in place. Consequently it would make it tremendously complicated for the Bourbon monarchy as the changes that were made between 1789 and 1815 possibly could be seen as progressive, while the return to monarchy could be scrutinized as an endeavour to turn back the clock.

The causes of the revolution of 1789 would become an obstruction to the restored Bourbon monarchy. The main cause was the organization and management of government, the Ancien Regime. There were frequent faults with this technique of governing which caused grievances predominantly in the midst of the Third Estate. There were 360 feudal codes previous to the revolution and there were 29 single-handedly in one particular town. An additional key objection was that fundamentally all decisions were made by the monarch. Thus the bourgeoisie and lower class that made up the Third Estate had no influence at all. The monarch was directed only by his own opinions, the clergy and the aristocracy. This becomes an even major problem when it is considered that the Third Estate numbered around 24,700,000 out of a population of 25,000,000. The burden of taxation rested principally upon the peasantry. One of the most terrible of the taxes to hit the peasants was the gabelle, this was a salt-tax. This was such a burden on the peasants as salt was used in order to preserve food, and so for survival. The burden positioned on the Third Estate, and the complete lack of rights that they had, led to greater than ever detestation of the Ancien Regime. This would develop into a major issue for the return of the monarchy as they were associated with this regime, and received much of the blame for the lower classes problems.  The taxation system also delayed and held up the development of the French industrial Bourgeoisie as several customs dues had to be paid in order to transport any goods across the country so it was unsuccessful and unbeneficial for businesses to do so. The administration was slow to act and overall the government was not progressing as industry progressed.

The citizens of France, predominantly the bourgeoisie, also got hold of a political education from philosophers such as Voltaire, Diderot and Rousseau. Voltaire’s abhor of the nobility and royalty, and his intense disapproval for the Church broadened amongst Third Estate. Voltaire was nonetheless prepared to sing the praises of an “enlightened” monarch. Thus Voltaire’s beliefs would not clash with the return of the Bourbon monarchy provided that they showed themselves to be ‘enlightened’. The philosopher that would challenge the political system most, and so Bourbon rule as well, was Rousseau. Rousseau wanted a government based on the General Will and his standards of liberty and equality were presented to the Third Estate. These would become two of the three principles of the French Revolution. Because Rousseau wanted ‘direct’ democracy, rather than the ‘representative’ democracy conventional in Britain, his principles were not realistic and sensible for a large state, and he accredited this, but his ideals were still taken up by numerous French people.

Perhaps, the last straw that disengaged the receiving of autocracy came with the American Revolution. The power and pressure of this was in fact twofold. First the French were irritated that their government was fighting a war for the rights of foreigners, while denying them the same rights on the home front. Secondly, the cost of the war (added with the luxurious lifestyle of the monarchs) led to a chaotic and dangerous situation for Louis XVI. Louis on several occasions appeared to want reform, particularly in order to bring in more tax money from the aristocracy, but usually failed to make the concessions necessary to achieve his goals.

All of these factors that led to the revolution would become a threat to the Bourbon monarchy as the people were no longer as accepting of autocracy as they has been before the revolution. The principles of liberty, equality and fraternity laid down in the Declaration of the Rights of Man in 1789 were crucial in this, as the monarchy would have to concede some of these principles, otherwise they would not be accepted by the vast majority of people within France. They would also have to accept the anti-clericalism of many French people. The Revolution, despite its later degeneration into chaos and Terror, created significant progress in France, and its changes would have to be acknowledged by the monarchy in order for them to survive.

The legacy of Napoleon would become a substantial challenge for the Bourbon monarchy. In any system the current leaders have to live up to their predecessors. After the glory years where Napoleon conquered much of Europe, if the Bourbons were unable to meet expectations, the attitude towards them would be hostile. After Napoleon’s coup d’etat at Brumaire he declared that “The Revolution is made fast on the principles on which it began; the Revolution is finished”. Looking back on events, it would be forgivable to think that the rule of a dictator would contradict the principles of the Revolution. However, Napoleon said himself “I closed the gulf of anarchy and brought order out of chaos. I rewarded merit regardless of birth or wealth, wherever I found it. I abolished feudalism and restored equality to all regardless of religion… I purified the Revolution.” In essence he created a myth that he was consolidating and saving the Revolution.  He argued the revolution would only have degenerated into farce had someone not come along to modify it. Indeed perhaps, had the Bourbons come back to power in 1799, rather than Napoleon, they would have found it easier to turn back the clock than they did in 1814.

The Napoleonic Legal Code embodied many of the principles of the Revolution and made them permanent. Feudalism ended and Meritocracy was born. Careers were now offered on ability, rather than birth, and the French institutions were reformed. Napoleon provided order and stability, while attempting to bring together both the émigrés and revolutionaries. The sales of lands previously owned by nobles that became enemies of the state were of great benefit to both the middle classes and peasants. The French would also remember that the reforms started by the Revolution were brought to other countries by Napoleon, furthering the ‘glory’ days of Napoleon’s rule, and making it even harder for the Bourbons when they returned in 1814.

The principle of equality can quite clearly be seen in the destruction of feudalism and the Napoleonic Code, which made all members of French society subject to the same system of justice. The ‘Legion of Honour’ and the freer career opportunities also furthered this. The French could also be grateful that Napoleon attempted to bring together France’s history and the new reforms. Napoleon reconciled the elements of the previous regime with that of the current one. The signing of the Concordat is a good example of this. Napoleon insured religious freedom, while recognising that Catholicism was the main religion. This and the return of the majority of the émigrés brought serenity to all areas of France.

It must be acknowledged that Napoleon’s rule was far from perfect. Many would say that he went to war too easily, his campaign in Russia was ill-thought out, and there were many deaths as a result of this. It can also be said that liberty suffered under Napoleon, despite it being one of the main principles of the Revolution. However, by ending the Revolution, but claiming to be carrying on with its ideology, and by being willing to adapt to what worked, whether it be old or new, Napoleon achieved what many middle class felt to be the Revolution’s purpose. Mathiez wrote that “His work would prove so solid that it made any total restoration of the past impossible.” Tocqueville said Napoleon “fell, but what was really substantial in his work lasted; his government died, but his administration continued to live…” Without Napoleon the Revolution’s aims may not have been realised, but also, without the Revolution, Napoleon may have been nothing more than a military officer.

As a result of the significant progress made between 1789 and 1814, the Bourbon monarchy would face a hard challenge governing France. The changes in ideology and the opportunities that Napoleon provided for the Third Estate, and the hostility towards the Ancien Regime would all make the Bourbons survival as rulers a demanding task. The only way that they could remain in power would be to learn from the mistakes of their ancestors, and to accept that total autocracy was no longer possible. The monarchy would have to adapt to survive.