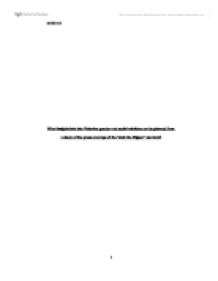 What insights into late Victorian gender and social relations can be gleaned from a study of the press coverage of the 'Jack the Ripper' murders?

What insights into late Victorian gender and social relations can be gleaned from a study of the press coverage of the 'Jack the Ripper' murders? This essay will look at how the press coverage of the 'Jack the Ripper' murders strengthened the idea of the East End as a dangerous place and therefore raised the sense of a division existing between those in the East End of London and those who lived in respectable areas. It will examine how the rise of the press in the nineteenth-century enabled those who were at the helm of society to be able to impact on the thoughts of the nation as a whole. It will also look at how women were treated in this period and will examine why many women were effectively 'forced' into prostitution in the East End due to the prevailing social conditions endemic in this area. It will be shown that although there was a rise in the late nineteenth-century of social explorers and of social missionaries, little was done to make safer an area of the metropolis highlighted by these 'explorers' as dangerous and in need of reconstruction. Changes in physical infrastructure such as lighting, housing and sewerage systems were as important to effecting change in these area as were the moral crusades of people such as William Booth, the Salvation army founder and evangelist, who advocated that change could be brought about ...read more.

Murder stories in the press at this time 'contained ingredients of a novel or short story'.12 These short stories were effectively a serialisation of real events and reports would either raise or allay fears for the reader and would enhance the appeal of the next days edition. This meant good business and excellent profits by the boosting of newspaper sales. The traditional married woman's work in the East End was as an outworker for the various manufacturing trades that were a part of the highly industrialised East End. The manufacturing was usually of clothing or footwear, matchbox, brush-, basket-, or sack making. Single women most often worked in factory jobs such as making jam, matches or confectionary.13 Many women from the East End turned to prostitution on a casual or part-time basis, as were necessitated by slumps in employment, which if happened for prolonged periods would end up causing situations of poverty. William Booth calculated in 1886 that 'inadequate employment (no work or low wages) was the reason for poverty in 55 percent of all 'very poor'14 families and in 68 percent of the 'poor'15 families.'16 However, although many women took to prostitution on a casual basis many more were career prostitutes. Donald Thomas states that in 1861 at least 80,000 women out of a population of 2,800,000 London residents were reliant on prostitution as a means of generating some income. ...read more.

So it can be seen that the rise of the press enabled those with wealth, those who owned or controlled newspapers, to be able, by way of heightening fears, to instil fears in the general populace about how to live ones life 'correctly'. In a letter supposedly written by Jack the Ripper dated October 5th 1888, the writer talks of their denial of a murder and how if the person murdered was not a prostitute then he himself, the butcher of Whitechapel would hunt them down. He wrote ' I swear I did not kill the female whose body was found at Whitehall. If she was an honest woman I will hunt down and destroy her murderer. If she was a whore God will bless the hand that slew her, for the women of Moab and Midian shall die...'31 Even if not written by the Ripper, this statement shows how some men expected women to be; chaste and virtuous and in the home. This was seen as the woman's proper place. However, with no other alternatives, women of the East End of London were left with little or no choice. With no unemployment benefits and few social care institutions other than the local workhouse, women were effectively forced to take up prostitution as a means of survival. If the chance of death at the hands of a homicidal maniac were a reason to not be a 'whore', the reality of death from starvation was a much more compelling reason as to why one should. ...read more.