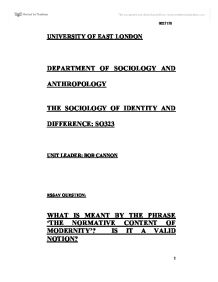 What is meant by the phrase 'The normative content of modernity'? Is it a valid notion?

UNIVERSITY OF EAST LONDON DEPARTMENT OF SOCIOLOGY AND ANTHROPOLOGY THE SOCIOLOGY OF IDENTITY AND DIFFERENCE: SO323 UNIT LEADER: BOB CANNON ESSAY QUESTION: WHAT IS MEANT BY THE PHRASE 'THE NORMATIVE CONTENT OF MODERNITY'? IS IT A VALID NOTION? The Western definition of modernity as inspired by certain Judeo-Christian realities has prompted questions whether or not modernity is a Western project and this has in turn lead to intense debate about the moral character of the project and also raised questions whether its normative content may have been different if it had not taken place in Europe. This essay will first describe the project of modernity highlighting its main themes and how it is claimed to have replaced the 'dark ages' of traditional, feudal society with a new social order. Using the ideas of Enlightenment thinkers such as Kant and Rousseau, the essay will elaborate on how these themes helped invent the modern Western notions of human rights and individual equality and put them on a secular and universal, as opposed to religious sectarian basis. As the essay explores the nature, limits, and validity of modernity as a western project, it will then focus on the ideas and arguments put across by Habermas and Foucault because they are representative of the modernist and postmodernist arguments in the current debate about the normative content of modernity, a debate that dominates contemporary social theory. While Habermas calls for a return to the Enlightenment project (the unfinished project of modernity) in which society progresses by and through the principles of reason and rationality, Foucault argues that the Enlightenment paved the way for the sciences of modernity or the sciences of man; that is the sciences of discipline, of govermentality, of surveillance, of domination. Evidence used to support arguments in the essay is mainly grounded in critical philosophical theory and therefore in-depth analysis is not possible. The Enlightenment began in seventeenth and eighteenth century Europe out of the desire to assert and foster individual freedom. ...read more.

is the possession of all human beings by nature; that is in virtue of their being born with the constitution characteristic of the species. For it is by reason that we can agree, Kant holds, that a maxim like the one about breaking promises when convenient consistently be willed to be universal. Modernity, though it began in Europe, has affected every nation in the West and, to some degree, all the nations of the world. In the early period of modernity, the project of rational inquiry was bound with notions of humanism and the project of emancipation-the assumption that reason, human happiness and freedom go hand in hand. This assumption is obvious in Kant's essays. However, both political and ideologies and the project of modernity developed throughout the modern period, continually increasing in complexity and sophistication as the initial naivet� of the Enlightenment slowly evaporated and strong elements of auto-critique emerged. Quite recently (50 yrs ago), the question of the Enlightenment has been open intensely and has once again entered into scholarly and political discussions. There have been criticisms from a variety of philosophical and political perspectives, the blindness, naivet� and inconsistencies of what they term "the project of enlightenment". James Schmidt (1996) can trace what went wrong in three broad lines of argument, originating in different responses to the relationship between Enlightenment and the French Revolution. "The first...is concerned with the relationship between reason, authority and tradition. The second... focuses on the disturbing affinity between reason, terror and domination. The third... seeks to liberate the ideal of enlightenment from all associations with the French Revolution." (Schmidt, 1996: 26). It is important to note that all the Enlightenment critics are still in agreement that there is something sinister about the light it casts. This is where we meet Michel Foucault. Foucault was influenced by Nietzsche's new Enlightenment doctrines. He is also sometimes known as Nietzsche's most faithful disciple. ...read more.

Despite the fact that "everywhere Foucault looked he found 'a complicity between the Enlightenment and domination... at times Foucault took up the banner of the Enlightenment" (Schmidt, 1996: 27). In the last decade of his life, he reflected again on Kant's 1784 essay "What Is Enlightenment?" In his final years, however, Foucault employed normative terms such as liberty and autonomy and completely shifted his ground to accommodate this criticism. According to Schmidt (1996) there is at least still one thinker who never lost sight of the peculiar connection between speech and the Enlightenment. Unfortunately, argues Cannon (2001), "Habermas is also reliant on a 'transcendental' notion of 'damaged intersubjectivity'...As a consequence, Habermas fails to bridge the gulf between an 'other-worldly' and a 'this-worldly' version of critical theory" (2001: xii) and in doing so he fails to ground critical theory in the normative contents of modernity. Cannon continues to argue that "In this respect, modernity merely realises the transhistorical form of 'ethical life inherent within language oriented to mutual understanding" (2001: xiii). In other words while Habermas claims to be defending the normative content of modernity, he is actually defending the normative content of 'speech oriented towards mutual understanding' which Cannon strongly believes is pre-modern. In conclusion, it important to observe that the Habermas versus Foucault debate is not only huge but still continues regardless of the fact that Foucault died in 1984. It is also important to observe that what Foucault and Habermas's disagreement over the character of modernity reveals, however, the inherently subjective character of the modernity/postmodernity debate. Both Foucault and Habermas have moved against postmodernism's relegation of modernity to the past by defending modernity's present status. For Foucault and other discontents of modernity, Kant's fundamental conception of rationality, autonomy and freedom has been hallmarked by a historical period in Western European and American society characterised by imperialism, the hegemony of dominant groups over other groups excluded from wealth, political power, and often basic human respect. ...read more.