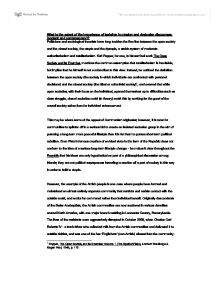 What is the extent of the importance of isolation in utopian and dystopian discourses (ancient and contemporary)?

What is the extent of the importance of isolation in utopian and dystopian discourses (ancient and contemporary)? Politicians and sociological theorists have long trodden the fine line between the open society and the closed society, the utopia and the dystopia, a stable system of moderate authoritarianism and totalitarianism. Karl Popper, for one, in his seminal work The Open Society and its Enemies, mentions the common assumption that totalitarianism is inevitable, but implies that he himself is not a subscriber to this view. Instead, he outlined the definition between the open society (the society in which individuals are confronted with personal decisions) and the closed society (the tribal or collectivist society)1, and averred that while open societies, with their focus on the individual, opened themselves up to difficulties such as class struggle, closed societies could (in theory) avoid this by working for the good of the overall society rather than for individual enhancement. This may be where some of the appeal of Communism originates; however, it is rarer for communities to splinter off in a serious bid to create an isolated sectarian group in the aim of pursuing a long-term more peaceful lifestyle than it is for them to pursue short-term political rebellion. Even Plato's famous creation of an ideal state in the form of the Republic does not conform to the idea of a serious long-term lifestyle change - he makes it clear throughout the Republic that his ideas are only hypothetical as part of a philosophical discussion among friends; they are not political superpowers intending to section off a part of society in this way in order to build a utopia. ...read more.

certain poetic rebuttal in lyric verse...[we] would be justified in letting poetry return" [607d], suggests that isolationist techniques are strictly controlled but are (to an extent) flexible. Amish members who contradict the rules of the society by (say) purchasing a car when they are full members of the society (i.e. after the rumspringa period) are given some time to amend their actions and atone for them. It is only if they consistently refuse to repent that they are permanently excommunicated (or shunned), and members can also choose to leave the society voluntarily if they wish (having not done wrong). Intriguingly, this could be perceived as isolation also being used as a threat, as well as being used as an enticement to the society. By being excommunicated, or choosing to leave the society, the individuals concerned risk a different type of isolation - they aren't included in the rituals of the dominant society, and they are no longer included in the utopia, and thereby expose themselves to deep loneliness. Margaret Atwood (in the dystopian novel The Handmaid's Tale) also uses the concept of isolation as a threat - if the handmaids fail to comply with the new regime, they are sent to the Colonies - islands where they have freedom away from the regime, but where chemical pollution hasn't been eradicated, meaning that the freedom has the sting in the tail of a slow and painful death. Consequently, the Amish and Plato (in creating their own utopian communities) must maintain security and avoid totalitarianism by ensuring that they "engage in a significant polemic with the dominant culture...and to do so must speak essentially the same language in order to make the ...read more.

that while a certain degree of isolation is helpful (the Amish communities are, after all, still part of a larger landmass), total isolation is not essential for a utopia to be effective and historic, even if this does occasionally lead to problems such as invasion by external bodies. It is difficult to see how Plato's community and Atwood's community would fare in today's world: partly due to their respective hypothetical and fictional natures, but also partly due to the Athenian context in which Plato's republic was created (e.g. the impulse to colonise surrounding areas). Both of these communities also involve persuading the current generation to buy into a very different way of life, whereas the Amish community was and is based on religious and moral precepts that were very familiar at the time of the community's conception (meaning that to an extent, Amish tenets are far less far-fetched than those delineated in other discourses). By still holding technology at a distance, exercising restraint and moderation, and by accepting limitations and living within them, the Amish have maintained the integrity of their family and community life12 - even if they do not always manage to evade undesirable side-effects of life such as violence and waste, as shown by the recent incident of the Amish shootings. In conclusion, it is not possible to create a utopia purely on the basis of isolation, mainly due to the problem of the current generation. While total isolation is a helpful element, a successful brainwashing programme or definite ideological framework must be the foundation on which a utopian community builds itself, with isolation being conducive to this rather than being the sole basis of its creation. ...read more.