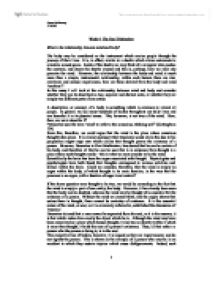 What is the relationship between mind and body?

Week 4: The Real Distinction What is the relationship between mind and body? The body may be considered as the instrument which carries people through the journey of their lives. It is, in effect, similar to a shuttle which allows astronauts to orientate around space. Inside of the shuttle we may think of a navigator who pushes the controls, and steers the shuttle around and this is, perhaps, how we may also perceive the mind. However, the relationship between the body and mind is much more than a simple, instrumental relationship, within each human there are also emotional and sensual experiences, how are these derived from the body and mind 'machine'? In this essay I will look at the relationship between mind and body and consider whether they can be described as two, separate and distinct units, or whether they are simply two different parts of one entity. A description, or concept, of a body is something which is common to almost all people. In general we see many hundreds of bodies throughout our daily lives and can describe it in its physical sense. This, however, is not true of the mind. How, then, are we to describe it? "Descartes uses the term 'mind' to refer to the conscious, thinking self." ...read more.

However, if the soul were separate from the body then differences would occur between the body and soul at death. It was this idea which led Williams to comment: "For him (Descartes) soul meant separable soul, and separable soul meant the possibility of immortality." (Williams 287) Although the idea of immortality may seem somewhat outlandish Descartes believed that the strength of the forces within the mind would not have to submit to biological death in the same way which physical cells would have to. Cottingham reflects upon this when he says that Descartes cannot conceive that: "Annihilation of a substance like the mind can result from 'such a trivial cause' as bodily death, which is simply a matter of division or change of shape on the parts of the body." (Cottingham 158). This idea is difficult to refute unless we take the view that the mind is simply the biological organ the brain, which has already been dismissed as a possibility. An argument may be constructed due to the fact that the mind has been certified as being in existence because of thought, therefore, if this thought is to stop due to death then we may also consider that the mind may cease to exist. ...read more.

That is, there is an interaction between these two parts which allows the human to function in the state which we would call 'alive'. However, they are also separate as the soul is able to transcend death, and is indivisible, unlike its bodily counterpart. The main problem with this argument, however, is that it relies upon a definition of the mind, or soul. If we are to believe that the mind is some inner object which cannot be seen, or proved scientifically, then it is almost impossible to falsify that it lives on after bodily death. However, if we are to consider that a person's essence is in a soul which consists of their personality, thoughts and emotions, all of which are simply biological responses and processes then the above idea could not be thought of as true - we would have to believe that when the body ceases, which in turn causes the brain to stop functioning, the essence of the person dies also. Therefore, the relationship between body and mind hangs, perhaps, more upon the definitions, and the consequences of such definitions, more so than upon the physical and spiritual links between them. ?? ?? ?? ?? Laura McInerney 11.02.02 1 ...read more.