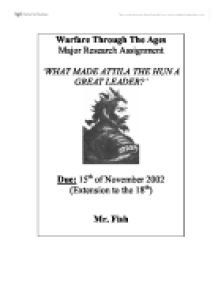 'What made Attila the Hun a great leader?'

Warfare Through The Ages Major Research Assignment 'WHAT MADE ATTILA THE HUN A GREAT LEADER?' Due: 15th of November 2002 (Extension to the 18th) Mr. Fish By Julian Veerasingam I chose to research Attila the Hun because of his extraordinary achievements. He was able to hold the Eastern and Western Roman Empires at his mercy, conquer most of central Europe, and unite the Huns. So for my assignment I decided to research the focus question, 'What made Attila the Hun a great leader?' and see how he was able to accomplish such feats. I discuss in my assignment, the ten features of Attila that I thought made him great. THE TEN FEATURES OF ATTILA THE HUN THE DESIRE TO BE IN CHARGE Attila the Hun was an aggressive and ambitious general. When he was still a young man, his uncle died, leaving the throne to be shared between Attila and his brother, Bleda. But that wasn't good enough for the determined Attila. He wanted to be the sole ruler of the Huns so badly that he killed his own brother. ...read more.

He killed people at the first sign of disobedience, thereby setting the standard of respect between him and his people. Attila didn't allow uncontrolled celebration, and only let his men loot towns when done for the good of the Hunnish empire, and not for personal gain. NEVER ACCEPTING PEOPLE WITH THEIR OWN AMBITIONS A lot of Attila's army was made up of people he had conquered. So the majority of them would share a common hatred of the Huns. The new recruits personal ambitions were of revenge, which was a danger to the Huns. But after some time most people lose their ambitions and become team players. The remaining disloyal soldiers were disposed and made example of by Attila; he had no room for treachery in his ranks. There were people of many cultures in Attila's army, but they all eventually learnt to fight as one in battle, or be executed LIVING OUT THE REPUTATION GIVEN BY YOUR ENEMIES Attila's worst enemies called him the "Scourge of God" and the "Fear of the World." ...read more.

EXPLOITING THE SPOILS OF WAR Attila rewarded his men with minor gains after every looting. He believed that with these small rewards, he could buy the obedience and loyalty of his soldiers. Attila also kept plenty of booty for times when they were travelling a lot. After researching 'What made Attila the Hun a great leader?' I have been able to narrow it down to ten features Attila has shown throughout his life. Numerous of Attila's ten features can be found in other great commanders, such as Alexander the Great, Genghis Khan and Julius Caesar. I have learnt that victory and defeat in battle depends on the range of skills shown by the commander. The soldiers who do the fighting put their trust in their leader, and expect him to lead them to victory. Through Attila the Hun, other barbaric tribes were influenced to take on the Roman Empires, which evitable led to the 'Fall of Rome'. I have also learnt that warfare is what drives technological advancement. Attila wanted the Huns to be able to match the innovations of Rome. This is what took the Huns out of the 'Stone Age Era', so to speak. ...read more.