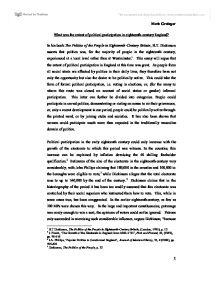 What was the extent of political participation in eighteenth-century England?

What was the extent of political participation in eighteenth-century England? In his book The Politics of the People in Eighteenth-Century Britain, H.T. Dickinson asserts that politics was, for the majority of people in the eighteenth century, experienced at a local level rather than at Westminster.1 This essay will argue that the extent of political participation in England at this time was great. As people from all social strata are affected by politics in their daily lives, they therefore have not only the opportunity but also the desire to be politically active. This could take the form of formal political participation, i.e. voting in elections, or, (for the many to whom this route was closed on account of social status or gender) informal participation. This latter can further be divided into categories. People could participate in crowd politics; demonstrating or rioting en masse to air their grievances, or, only a recent development in our period, people could be politically active through the printed word, or by joining clubs and societies. It has also been shown that women could participate much more than expected in the traditionally masculine domain of politics. Political participation in the early eighteenth century could only increase with the growth of the electorate to which this period was witness. In the counties, this increase can be explained by inflation devaluing the 40 shilling freeholder qualification.2 Estimates of the size of the ...read more.

It was during the Exclusion Crisis that the term "mob" was first used, which was short for mobile vulgus, Latin for movable or excitable crowd.7 Dickinson argues that crowd demonstrations and riots can be seen as the most common and effective form of plebeian politics in the period, not least because it allowed all members of society to participate in informal politics, not just the males eligible to vote. The actions of crowds took a number of different forms; they included the celebration with bonfires of events such as the anniversaries of the Gunpowder Plot and the accession of Queen Elizabeth I on November 17th, or the burning or hanging of effigies, quite often of the Pope, to looting and violence, the victims of which were usually Catholics. For example, the printing house of Henry Hill, the King's printer, who had published several works in support of Catholicism, was destroyed with his printing equipment and several hundred reams of paper.8 Crowd politics could be effective in alarming the authorities. William Sachse wrote that, while he does not believe the mob had an affect on the outcome of the Glorious Revolution as they were not well led or organised enough, without the rioting and mobbing, it may have taken longer to convince the peers and the magistrates of London to support William as a provisional governor. ...read more.

participate in the politics of patronage.19 Patronage was the economy of obligation and favour, through which "interest" and "influence" could be sought or exchanged through or for alliances and 'connexions'. Women often sought favours or preferment for themselves and their families, but, crucially, for other men and women, which "demonstrate[s] that women's involvement in patronage extended beyond the narrow boundaries of their immediate families."20 It was an important way for them to participate in political life, according to Chalus, because it took place in the realm of personal relations, bridging the gap between the political and social arenas through which women found they were able easily to navigate. Women in our period were able to fully participate in a kind of politics which was at once both formal and informal. We have seen, then, that the range of ways in which the people of eighteenth-century England could take an active role in politics, whether formal or informal, direct or indirect, or local or national, was significantly varied. Despite the fact that the right to direct electoral participation was restricted to male freeholders of above 40 shillings, the door to political participation was closed to no man or woman. Virtually all social strata could participate informally, through publishing or reading political ideas in print, using social contacts to secure patronage or airing their grievances in crowds on the street; that is, voting with their feet. ...read more.