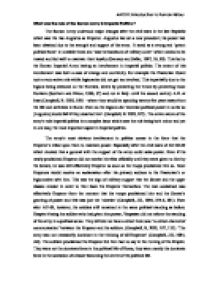 What was the role of the Roman Army in Imperial Politics? KB2010

What was the role of the Roman Army in Imperial Politics? The Roman Army undertook major changes after the civil wars in the late Republic which saw the rise Augustus as Emperor. Augustus had set a new precedent; his power had been obtained due to the strength and support of his army. It acted as a strong and 'potent political force' in unstable times and 'was the backbone of military order' which needed to be treated and fed well to maintain their loyalty (Garnsey and Saller, 1987, 16, 89). This led to the Roman Imperial Army having an involvement in imperial politics. The extent of this involvement was both a case of change and continuity. For example the Praetorian Guard took a very active role whilst legionaries did not get too involved. This is partially due to the legions being stationed on the frontiers, where by protecting the throne by protecting those frontiers (Southern and Dixon, 1996, 37) and not in Italy -until the second century A.D. at least (Campbell, B. 2002, 108) - where they would be spending twenty-fire years away from the life and activities in Rome. Even so the legions did 'exercise political power in so far as [Augustus] would fall if they deserted him' (Campbell, B. 2002, 107). The entire nature of the army's role imperial politics is a complex issue which sees the role being both minor and yet in one way, the most important aspect in Imperial politics. ...read more.

These officers would probably have had their own political agenda's whilst on campaign and it has been said that 'the soldiers carried out their political obligations in full knowledge of what they were doing' (Le Bohec, 1994, 256). Even at the start of the Imperial period, the army's role 'though potentially important, was entirely extra-constitutional' (Campbell, B, 2002, 108). They were loyal directly to the Emperor. They swore their oath of allegiance to him rather than to the Senate and the People of Rome. Ando (2007, 369) says that the army became public property and the soldier's public servants under Augustus' reforms. This is true as although they declared there loyalty to the one man, as history has proved legions did change their allegiance to other generals. So whilst the army was in theory the 'property' of the Emperor, it was the Empire they were serving. Defending its borders and controlling the trouble in any province that might be likely to rebel against Roman rule. An example of the soldier's turning on their Emperor is the case of Macrinus- Emperor A.D. 217-218- whose soldiers turned on him only when he threatened to reduce pay and benefits (Campbell, B, 2002, 110). The significance of this is that the rebellion was when a policy was coming that directly affected them all that they disliked. It was not for his apparent 'effeminate habits' that supposedly offended the troops. Whilst this may have angered them, it is interesting that even so it was not for his luxurious living that brought about Macrinus' end. ...read more.

The 'army was now more important in politics and potentially uncontrollable' (Campbell, B, 2002, 119). It could be said Tacitus (in Campbell, J.D, 1984, 369) expressing his belief that there was 'always a danger of military anarchy in a state where political power depended on an autocrat's control of the army' foresaw something similar happening. This suggests that even in the first to early second centuries that there were signs that pointed to the instability to come due to the army's role in the overthrowing and proclaiming new Emperors. The Roman Army's role in Imperial Politics was quite complex. Whilst the army swore an oath of allegiance to the Emperor and had close personal ties to him. However as it was proven later on at the end of the Severan dynasty, the army had gained quite considerable political power in that there were greatly involved in placing the next Emperor onto the throne. However we do have to remember that the legions generally were on the frontiers and away from the limelight of the Roman political centre. They were the guardians of the frontiers and even expanded the Empire, eventually with the Emperor leading the army. The Emperor was closely tied to his troops and relied on them to stay in power. Without their support it would have been a very different story. Other men may have overthrown them and more civil war's occurring. The Praetorian Guard had a seat in the heart of politics by being directly in Rome. They with the army played a fundamental role in Imperial Politics by the fact that it was due to them that it was remained Imperial. ...read more.