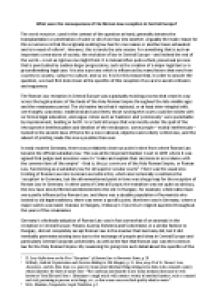 What were the consequences of the Roman Law reception in Central Europe?

﻿What were the consequences of the Roman Law reception in Central Europe? The word reception, used in the context of the question at hand, generally denotes the transplantation or penetration of some or all of one law into another. Arguably the main reason for this occurrence is that the originally existing law has for one reason or another been exhausted and is in need of reform[1]. However, this is rarely the sole reason. For something that is such an important cornerstone of society, the evolution of law in Central Europe ? and indeed the rest of the world ? is not as rigid as one might think. It is instead often quite a fluid, piecemeal process that is punctuated by sudden larger progressions, such as the creation of a major legal text or a groundbreaking legal case. It is also a process which is influenced by many factors that vary from country to country, culture to culture, and so on. It is for this reason that, in order to answer the question, we must first look closer at the specifics of this reception if we are to avoid confusion and vagueness. The Roman Law reception in Central Europe was a gradually evolving process that crept its way across the legal systems of the lands of the Holy Roman Empire throughout the late middle ages and the renaissance period. The old native laws that it replaced, or at least inter-mingled with, were largely customary, traditional and unwritten; those running the courts could be nobles with no formal legal education, and vague crimes such as 'badness' and 'promiscuity' were punishable by imprisonment, beating or both[2]. ...read more.

The people who supported this view at the time were generally mistrusting of Italians, who Eberlin Von Gunzburg declared were capable of ?trickery and fickleness?, while in comparison the German people were, according to Luther, ?faithful, truthful, steadfast people who, when they say 'yes' mean yes, and when they say 'no' they mean no?[6]. We can see, then, that the introduction of Roman Law met some opposition from those who were comfortable with the status quo. Roman Law was also far more scholarly than the customary laws of Central Europe, and some intellectuals took interest in it as an exciting and rewarding occupation. As a result, university law faculties grew as increasing numbers of students made their way there in order to become learned jurists, and also as law faculties generally became sources of guidance and legal expertise[7]. University-educated jurists became prominent figures in the social and political arenas. To those who were distressed by the changes in law, these newly educated and elevated lawyers became objects of resentment, anger and suspicion, blamed for the disappearance of old ways and the imposition of unwanted new ones; robbing people of control over their own fates[8]. Ever-outspoken about the state of German Law, Luther accused new jurists of greed: ?the real reason why you people study law and become jurists is money. You want to be rich?[9]. The reception of Roman Law caused those who were educated in law to rise among the upper echelons of society, replacing amateur jurists who were forced to either educate themselves or change professions; causing certain sections of society to view Roman Law as a cold, overly businesslike and elitist imposition. ...read more.

Debate arose in numerous areas of society about whether the new laws were more suitable than the old laws, and this created a degree of enmity between those who benefited from the new law and those who didn't. However, the increased functionality and practicality of Roman Law was ultimately beneficial to increasingly modern and advanced societies across Central Europe. ________________ [1] E. Levy Reflections on the First ?Reception? of Roman Law in Germanic States, p.20. [2] M.Rady, Judicial Organization and Decision Making in Old Hungary, p.11. Also, on p.62 of G. Strauss's Law, Resistance, and the State, there is a quote by Saxon jurist Melchior Kling writing to his duke in the sixteenth century which illustrates the flaws of native laws: ?The confusion and disorder in our Saxon territorial law must be well known to Your Electoral Grace. Oftentimes a single article will contain a variety of unrelated matters, such as criminal and civil, pertaining to persons or to things, etc., so that a man can never find quickly what he wants?. [3] M.A. Glendon, Comparative Legal Traditions, p.5. [4] G. Strauss, Law, Resistance and the State, p.57. [5] S. Rowan, Reformatio Iuris and Luther's Reformation: Comment on the Lutheran Reformation and German Law, p.632. [6] Strauss, p.242. [7] S. Rowan, Reformatio Iuris, p.632. [8] Strauss, p.191. [9] Ibid. [10] Ibid. p.77. [11] Ibid. [12] S. Rowan, Reformatio Iuris, p.641. [13] Excerpt from O. Fuchsberger, Justinianischer Instituten . . . Dolmetschung, Aii in Strauss, p.99. [14] Strauss, p.60. [15] Ibid. p.73. [16] J.F. Harrington, Reordering Marriage and Society in Reformation Germany, p.148. [17] Taken from a sermon on 6 January 1544, in Strauss, p.217. [18] Strauss, p.219. ...read more.