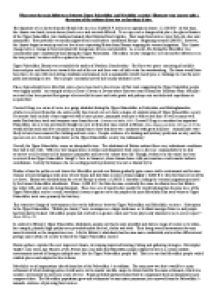 What were the main differences between Upper Palaeolithic and Mesolithic societies?

﻿What were the main differences between Upper Palaeolithic and Mesolithic societies? Illustrate your answer with a discussion of the evidence from two archaeological sites. The departure of ice sheets from the British Isles in circa 18,000 B.P. led to reoccupation in about c.12,500 B.P. At this time, the climate was harsh, terrain baron, food scarce and survival difficult. To occupy such a disagreeable place, the glacial hunters of the Upper Palaeolithic were hardened nomads who followed food supplies. Their main food sources were fish, elk, deer and mammoths. They probably seasonally migrated back and forth to continental Europe. Beginning around 8,000 B.C. however, the climate began to warm up and sea levels rose separating Britain from Europe stopping the seasonal migration. This climate change led to a change in food and plant life being more diverse and plentiful. As a result, life during the Mesolithic was considerably more comfortable than during the Upper Palaeolithic. Mesolithic society changed as a result and the differences in the two periods? societies will be explored in this essay. Upper Palaeolithic Britain was resembled the tundra of Northern Canada today. The flora was sparse consisting of inedible ferns and pine and boreal trees towards the end of the era and these were of little value for woodworking. The fauna would have been fierce to cope with such living conditions and animals such as mammoths would clearly pose a challenge to even the most proficient hunting society. These people constantly moved and usually inhabited caves. ...read more.

These communal burials were routine until the Bronze Age. Another similarity between the two periods is although Mesolithic people did indeed migrate more infrequently than Upper Palaeolithic people, they did overall remain nomadic hunter-gathers, just to a much lesser extent. Starr Carr, a hunting camp that was located at the edge of ancient Lake Pickering, North Yorkshire provides archaeologists with a wealth of information as this site was as a microcosm of Mesolithic life. Excavated by Grahame Clark, the site was occupied from c.7,500 B.C. and consists of a main settlement set back from the shoreline with multiple outer lying smaller camps. During the Mesolithic, this area was not too dissimilar to the Norfolk Fens today (wet lands). The site included an elevated birch planked deck, originally situated on the edge of the lake. This pier-like structure was presumably for fishing however fish bones were not recovered from Star Carr. Smith suggested out this is probably because of acid in the peat that was strong enough to disintegrate fish but not mammal bones whilst Pryor thinks the until recently frozen North Sea had not been colonised by fish yet. (Pryor, 2003, p.85) The peat enabled artefacts to be well preserved. Archaeological finds here include around 17,000 flint artefacts, animal bones, stone and amber beads, and, crucially, a wooden paddle (indicating boating, maybe for fishing and/or travelling), 21 ornate antler headdresses and remains of canis familiaris (a dog). The headdresses are deer skull with antlers mounted on it to make a person resemble a deer. ...read more.

The foremost reason for this change in society is due to Britain being isolated from continental Europe, thus, migration to the continent was not possible and improvement in climate. In short, there is a definite and clear transition between the Upper Palaeolithic and Mesolithic periods instigating numerous social changes. Paramount of these is the far less relocation of and increased quality of settlements, after that; new hunting strategies. All said changes were a direct result of, or at least party influenced by the Mesolithic?s warmer climate. Clark, G. 1967. Stone Age Hunters. London: Thames & Hudson. Dawkins, W. and Mello, J. 1879, ?Further discoveries in the Cresswell Crags? in Journal of the Geological Society, volume 35, pp. 724-735. Degerbol, M. 1961. ?On the find of a preboreal dog (canis familiaris) from Star Carr, Yorkshire with remarks on other Mesolithic dogs?. in The Prehistoric Society, volume 27. p. 35. Pike, A. Gilmour, P. and Pettitt, R. 2005. ?Verification of the age of the Palaeolithic rock art at Creswell? in the Journal of Archaeological Science, volume 32, pp.49-50. Pryor, F. 2003. Britain BC: Life in Britain and Ireland before the Romans. London: Harper Perennial. pp. 79- Scarre, C. ed. 2005. The Human Past: World Prehistory & the Development of Human Societies. London: Thames and Hudson. pp. 396-397. Scarre, C. ed. 2001. The Times: Archaeology of the World. London: Times Books. pp. 85-86. Smith, C. ed. 1992. Late Stone Age Hunters of the British Isles. London: Routledge. pp. 159-168 and 168-180. Thatcham through the ages. (2007). Retrieved from Thatcham Historical Society: http://thatchamhistoricalsociety.org.uk/publications/papers/ages ...read more.