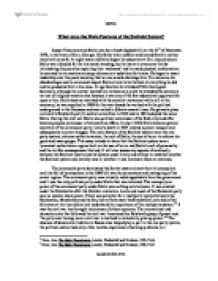 What were the Main Features of the Stalinist System

What were the Main Features of the Stalinist System? Joseph Vissarionovich Stalin was born Ioseb Jughashvilli on the 21st of December 1879, in the town of Gori, Georgia. His father was a cobbler and he and Stalin's mother were both ex-serfs. At eight years old Stalin began his education at Gori church school. Stalin was ridiculed for his low social standing, but he learnt to overcome this by intimidating his peers by exploiting their weakness' and to avoid physical confrontation he scorned his tormentors as using violence as a substitute for brains. He began to assert leadership over his peers knowing that no one would challenge him. To overcome his disadvantages and to command respect Stalin strove to be the best at everything he did and he graduated first in his class. At age fourteen he attended Tiflis theological Seminary, although his mother wanted him to become a priest he attended the seminary not out of religious vocation but because it was one of the few educational opportunities open to him. Stalin became involved with the socialist movement while still at the seminary, he was expelled in 1899 for the next decade he worked with the political underground in the Caucasus and was exiled to Siberia several times. He gained a place on Lenin's Bolshevik party's central committee in 1912 and in 1913 adopted the name Stalin. During the civil war Stalin was political commissar of the Red army and after became peoples commissar of nationalities affairs. In April 1922 Stalin became general secretary of the communist party. Lenin's death in 1924 created a power vacuum and subsequently a power struggle. The main feature of the Stalinist system were the one party system, extreme authoritarianism, the cult of Stalin, the use of terror to achieve his goals and mass purges. This essay intends to show that the Stalinist system was a tyrannical authoritarian regime built on the use of terror and Stalin's cult of personality and the terrible consequences this had. ...read more.

In 1937 he managed to charm Lion Feuchtwanger who was renound as a tough and experienced observer. The cult of Stalin had enormous effect of the arts. The cult had the biggest effect on literature, which lapsed into temporary dullness, writers quoted Stalin in works on many subjects ranging from ancient history to romance novels. Stalin encouraged the fanning of his cult but was careful at the same time to make himself appear to be the executor of the will of the party. Stalin was able to do this because he understood the psychology of his people and was especially able to appeal to the young. "He knew how to evoke that blend of idealism, romantic craving and brutality which is often typical of the young... he appealed to their need for action and enthusiasm."9 The seventeenth Congress of the communist party in 1934 is an excellent example of the adoration and praise that Stalin received for his services even from within the party. There are hundreds of pages of records of the proceedings at the congress which are littered with worshipful references to Stalin. "Stalin was subject during it to excessive praise. But even the word praise is insufficient: Stalin was extolled, worshipped."10 Stalin was hailed as a genius and hero of the working classes, which continued to be the view of many people right up until Khrushchev's policy of de-Stalinization. Few figureheads can claim to have instilled the same level of fear into their people as Stalin. However it was not Stalin that instigated the use of fear. Fear had been used as a instrument of control under Lenin. The Cheka were the first secret police force and they earned themselves a fearsome reputation especially after the first Cheka order of February 1918, calling for soviets to shoot on sight all "counter revolutionaries". "Lenin accepted as the lesser evil that there should be an institution which was above the law, that it should be given vast powers and that violence and arbitrariness ...read more.

terrorized to become incapable of acting independently."18 It seems more likely that Stalin was acted to secure his totalitarian regime believing this served the interests of the revolution and that only he could interpret these interests rather acting act of pure cruelty. In conclusion Stalin's regime was a tyranny which me managed to create by manipulating and outmanoeuvring his opponents to gain a position of power. He built on Lenin's legacy to develop a cult of personality which brought him praise and devotion from the masses. He ruthlessly employed the apparatus of the secret police to instil fear and terror in people in order to coerce them into submissiveness and ideological conformity. He purged the party and the nation of all possible enemies, real and perceived to him and the system he had created. He was relentless in pursuit of his goals and was determined to achieve them through any means necessary. He superseded the party and succeeded in transforming it into a instrument of his iron will. The party had supreme authority but Stalin's authority over the party was supreme. In creating an extreme authoritarian system millions perished and countless lives were ruined. The Stalinist system however built on many features of the regime under Lenin, the single party system, the use of force, authoritarianism and to a certain extent the cult of personality, but the difference lies in the application of these features, Stalin took these to an extreme. It is difficult to believe that Lenin would have instigated the mass purges particularly of party members or that he would have built up a cult of personality that overshadowed the party and encouraged such sycophantic god like worship that became the main features of the Stalinist system. Whether Stalin madly craved power or applied some sort of perverted logic in his determination to achieve the goal of socialism in one country it is certain that his legacy will continue be felt long after his strangle hold over the soviet system had eneded. ...read more.