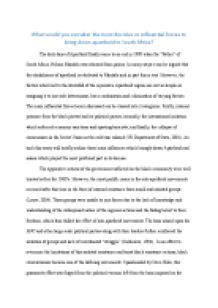 What would you consider the most decisive or influential forces to bring down apartheid in South Africa?

﻿What would you consider the most decisive or influential forces to bring down apartheid in South Africa? The dark days of Apartheid finally came to an end in 1990 when the ?Father? of South Africa, Nelson Mandela was released from prison. In many ways it can be argued that the abolishment of apartheid is attributed to Mandela and in part this is true. However, the factors which led to the downfall of the repressive Apartheid regime are not as simple as assigning it to one sole determinant, but a combination and culmination of varying factors. The main influential forces herein discussed can be classed into 3 categories. Firstly, internal pressure from the black protest and its political parties; secondly, the international isolation which enforced economic sanctions and sporting boycotts; and finally, the collapse of communism in the Soviet Union as the cold war relaxed (US Department of State, 2001). As such this essay will briefly outline these main influences which brought down Apartheid and assess which played the most profound part in its demise. The oppressive actions of the government inflicted on the black community were well known before the 1960?s. However, the most prolific years in the anti-apartheid movements occurred after this time in the form of internal resistance from small and isolated groups (Louw, 2004). ...read more.

The South African police and other supporters of apartheid relished this internal fighting of the resistance groups as it made the black community appear as if they were not ready to rule the country. Supporters of apartheid stated that the blacks were too violent and not willing to accept other people's views, which is needed if everyone is to live freely in a democratic society. Despite the disagreements which allowed apartheid to continue, the combined effort of large scale demonstrations undertaken by these anti-apartheid groups would serve as a catalyst for international support for the black cause and condemnation against the South African government The decline in power of the Soviet Union as a result of the decay of the Cold War played an integral part in dismantling the apartheid regime. The lack of international exposure and outcry regarding apartheid was largely based upon the need of the western world, namely the U.S for capitalistic gain. As such the relationship between the Cold War and the downfall of Apartheid was the fact that apartheid was only allowed to continue due to the Cold War (US Department of State, 2001). America viewed South Africa as the stronghold of economic wealth and strength within Africa and as such did not want to jeopardize its control over the trade and shipping routes, with it falling under Soviet communist rule. ...read more.

refused to buy these products. Therefore, South African companies had no money with which to pay their workers causing an increase of black unemployment and poverty and a decrease in white incomes as well as a raise in their taxes. Consequently, protests began in South Africa. The financial crisis in 1985 was a direct cause of these imposed sanctions (Hirsch, 1989). The crisis initiated the drop of the Rand and sent the government to declare a state of emergency (Hirsch, 1989). Such an increase in international condemnation and internal demonstrations created an anarchic society thereby forcing the population to believe that it was time for change in South Africa. As evidenced above, the importance of international support and intervention cannot be understated. The boycotts and economic sanctions imposed against the apartheid regime can be seen to be more of an influential force that finally triggered wholesale changes to occur within the country. Yet the most decisive factor behind the fall of apartheid was the opposition within the country from black movements. Their protest and other demonstrations, which at times ended with hundreds dead and thousands more injured, drastically eroded the regime and created doubts within the white faction about their system. Intrinsically the efforts by anti-apartheid groups within the country was a double-edged sword that forced the western world to take notice and intervene. ...read more.