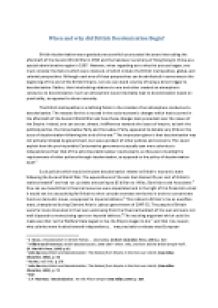 When and Why did British Decolonisation begin?

﻿When and why did British Decolonisation Begin? British decolonisation was a gradual process which punctuated the years interceding the aftermath of the Second World War in 1945 and the handover ceremony of Hong Kong to China as a special administrative region in 1997. However, when regarding as to why this process began, one must consider the factors which were involved, of which include the British metropolitan, global, and colonial perspectives. Although each one of these perspectives can be attributed in some way to the beginning of the end of the British Empire, not one can stand scrutiny of being a direct trigger to decolonisation. Rather, their interlocking relations to one and other created an atmosphere conducive to decolonisation. Such an atmosphere would inevitably lead to decolonisation based on practicality, as opposed to sheer necessity. The British metropolitan is a defining factor in the creation of an atmosphere conducive to decolonisation. The reasons for this is routed in the socio-economic changes which had occurred in the aftermath of the Second World War and how these changes took precedent over the issues of the Empire. Indeed, one can see an, almost, indifference towards the issues of empire, as both the political parties, the Conservative Party and the Labour Party, appeared to debate very little on the issue of decolonisation following the end of the war.[1] The impression given is that decolonisation was not actively initiated by government, but was a product of other policies and concerns. ...read more.

Britain was to bear much of the burden of European defence against the possibility of war with Russia, with its only ally being an impoverished France. The occupation of Germany alone cost Britain £100 million following the war, being manned by some of the 1.4 million armed servicemen.[21] Such an expenditure on funds and manpower can be attributed to the abandonment of Greece and Turkey in 1947.[22] It is undeniable that such a military commitment would be incompatible with that of colonial defence[23] and one can see that the decolonisation of India, although not being decolonised for strategic reasons, did reduce the pressure of those commitments.[24] Evidence suggests that pressure on manpower and finances in the face of the Soviet Union was not directly linked to the beginning of decolonisation, but does, however, suggest that defence against Russia was of primary concern and that empire was subsidiary to this. The rise of Communist Russia as a world power induced communist movements throughout the world, which were, in turn, provided with resources from the superpower. One can see how the British combated communist revolution in 1950, with the Korean War, but more importantly, one can see how its decolonisation was swayed by growing communist influence and how Britain tried to prevent it. When regarding the communist insurgency in Malaya Britain’s decolonisation of the area was utilised in a way which would win favour with the local elites and isolate support for such insurgents. ...read more.

Overall, one can see that the significance of the metropolitan, global and colonial perspectives in starting the process of decolonisation. However, it is more so evident that each one could not be effective in bringing about decolonisation when isolated as a separate factor. The inconsistencies of each perspective suggest this, due to the fact that each one could be debated in its actual effectiveness in beginning decolonisation. It was the connection between the three perspectives which had led to an atmosphere conducive to decolonisation. For instance, nationalistic overtones in the colonies were supported both by the metropolitan?s growing indifference toward empire and the violence it entailed and the growing global demand for the end of empire. Likewise, the indifference of the metropolitan was swayed by the demand for decolonisation from both the colonies and world. Global opinion could have been ignored by Britain had there been little nationalist sentiment and a more concerted metropolitan effort toward empire. All these interacting perspectives stems from the fact that Britain was no longer the powerful empire it had once been. Its metropolitan was unenthused by the continuation of empire, the world was now anti-colonialist, as was the superpowers which dominated it, and the colonies were now demanding more independence. Britain?s decolonisation began, because the world had changed and Britain would have to follow suit. Resistance, as seen with the Suez Crisis merely, punched home this reality, as the colonial, metropolitan and global perspectives simply pushed Britain through the process of decolonisation and it reacted accordingly and practically from the start. ...read more.